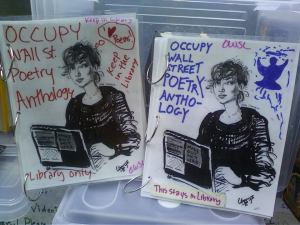 So where is the #poetry in #occupywallstreet (yes, the #occupoetry (or maybe #occupyoetry?))?
I am asking because while people are wondering what the soundtrack to the worldwide occupation movement might be, nobody seems to care what literature #ows cites as inspirational and what literature its poets and writers aspire to produce. The only thing comes to mind is Alan Moore's comic 'V for Vendetta' that inspired the Guy Fawkes masks, regular seen at occupy demonstrations, as worn by sympathizers of Anonymous.

So, you are camping for weeks or months on some godforsaken square with your friends who, like yourself, are becoming more scruffy everyday. What do you do in the evening hours when nothing much is happening: you sing. That is how it has always been, and I like to believe that originally poetry was exactly that: words to music, language measured to a rhythm, inspirational speeches given over a camp fire. Poetry originates itself - if the conditions are there. Robert Graves for instance spoke about the ground mind composing poetry in the trenches of WWI. Poetry is about expressing sentiments and emotions direct and from the heart. Objectivity, critical distance, (and perhaps even rationality itself?) belong to prose. Poetry exists in the moment and the moment for all those people on all those squares is now.

When I saw the video of Slavoj Zizek's speech at #ows I was completely overawed with the use of the 'human microphone' or 'human megaphone' principle where the people in the front rows repeat the speaker. What a powerful way of imprinting a written text on a human mind. You can imagine some unknown poet reciting from memory a song he or she composed while his audience repeats it phrase after phrase, writing it on their souls for ever (with Gilgamesh or the Rig Veda as a 'product' thousand years later).  In our own time Allen Ginsberg marvelled about the capability of Aboriginal songman to indefinitely remember large amounts of text heard only once.

Poetry is about mind control and I would love to see one voicing her or himself through the human megaphone.


But there is poetry at occupy (and poets at Occupy). I just missed a local poet at the Occupy Utrecht festival while the librarian of #ows has collected an Occupy Wallstreet Poetry Anthology that exists as three ring bound volumes with poetry emailed to them by amateurs and pro's alike. Here is what he writes:


Poetry illuminates the soul of Occupy Wall St. A lot of people are asking, “What are the demands” and the poets voices show just how nuanced the human spirit and impossible a set of demands truly is. This occupation is about transforming consciousness and the poetry community is a major part of that process.

To read it you have to visit the people's library. There is also a weekly poetry reading sessions on Friday evenings. I do not know if the human megaphone comes into action.  Strictly speaking it is not yet #occupoetry in the hard definition but that can only be a question of time.

Ows at Zuccotti is evicted, perhaps for the better perhaps, ready to move elsewhere, occupying houses, finding spaces, learning new things and forms of living together, away from the prying eyes of the media.

There is an interesting piece in the Nation in which people's librarian William Scott has this to say:


During the raid, Stephen Boyer, a poet, friend and OWS librarian, read poems from the Occupy Wall Street Poetry Anthology (see peopleslibrary.wordpress.com) aloud directly into the faces of riot police. As they pushed us away from the park with shields, fists, billy clubs and tear gas, I stood next to Stephen and watched while he yelled poetry at the top of his lungs into the oncoming army of riot police. Then, something incredible happened. Several of the police leaned in closer to hear the poetry. They lifted their helmet shields slightly to catch the words Stephen was shouting out to them, even while their fellow cops continued to stampede us. The next day, an officer who was guarding the entrance to Zuccotti Park told Stephen how touched he was by the poetry, how moved he was to see that we cared enough about words and books that we would risk violent treatment and arrest just to defend our love of books and the wisdom they contain.