Strange duck in the park [edited] 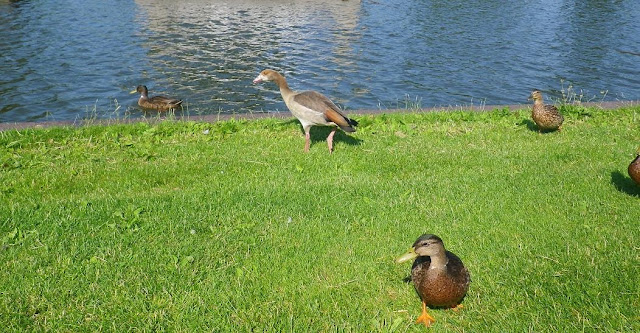 I went to the park to feed my old bread to the ducks and coots in the park. It was then that we saw the stranger above. I think it is a large duck but it might be a small goose. (?). I have never seen it before and I was looking for it two days later but no it wasn't there anymore. Gone forever. I am not surprise because it was clearly no competition in the bread run to the ferocious competition of the coots. Let alone to the savage wild ducks, the crows and the gulls. It walked very high on its legs and it lacked the agility to move its neck with any kind of speed. Goodbye friendly passenger, we enjoyed your brief presence.

Have studied duck websites but no name.

Note: Two people rightly suggested this bird as the Egyptian goose. A bird that was introduced as a pet but escaped. For a good entry on the bird, in Dutch read this.
op zondag, juli 28, 2013 3 opmerkingen:

How to live on Planet Earth: Nanao Sakaki 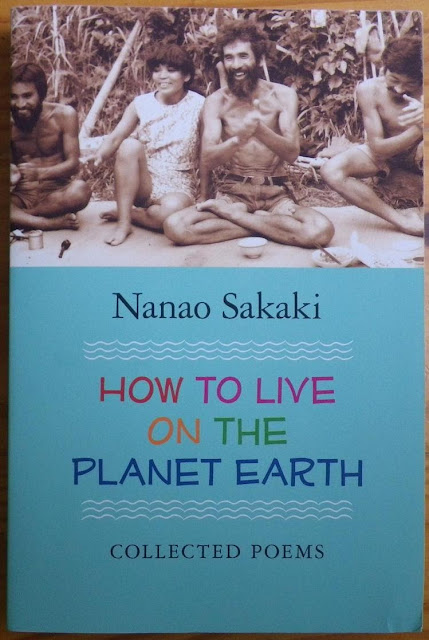 Most people will know about Nanao Sakaki (1923-2008) through Gary Snyder who lived with Sakaki's tribe on the Japanese island of Kyushu in 67/67. From 1969 onwards Sakaki lived in the United States for ten years and published four poetry books. He fought in the second world war and I wonder if behind the seemingly chaotic contours of his life lies an untreated case of post-traumatic stress, ala Robert Graves whose White Goddess is sometimes understood as a kind of sublimated shell shock. The man, in any case, deserves a biography but the publication of his collected poems "How to live on the Planet Earth" (2013, Blackberry books) is even more important. It's a beautiful book with really nice typesetting. I was barely acquainted with his work and am very happy to get the chance to savour it now in it's entirety.

I haven't digested all of it but the things that immediately strikes me is that there is little 'progress' in his writing throughout his life. Maybe at first he uses slightly more 'poetic' language before becoming ever more sharper, clearer and cleaner. His hallmarks are a disgust with consumer culture and environmental degradation, a proclaiming of the pleasures of a simple life.

Getting water at the spring

Chattering with a neighbor

The sun goes down.

Sakaki has a few 'tricks': he lists things, he chants, he calculates, he lives with the weather and the stars. A happy day is when a rare animal shows him/herself. There seems to be little creative development and the work is consistent in tone and content from the first to the last poem. As he gets older he writes more obituaries and their underlying sentiment is one Buddhist acceptation of inevitable suffering. Sakaki wrote down his poetry as it came to him, without doubt and without editing, like a bird singing. Or so it seems. The poems are tribal, he studied the language and literature of the old societies, at times his poems recall forms known from Rothenberg's anthologies of EthnoPoetics. He had a sardonic humour all his own.

Nanao Sakaki was a man who lived his life according to his own plans. He was not a sophisticate, maybe the universities will hate him. He was primal, a true original and his poetry reflects that. His style looks simple and easy to copy but I don't think you can fake it. It could be that Buddhist tradition has models for such a man, but if I had to compare him to anyone it would have to be William Blake. Cultish, but only long after his death.

Born of a humble & poor family,
Received minimum education,
Learnt how to live by himself at fourteen,
Survived storms, one after another.
Bullets, starvation & concrete wastelands.

Now & again
Loves to suck the nectar of honeysuckle,
To flutter with dragonflies & butterflies,
To chatter with winter wrens,
To sing song with coyotes,
To swim with humpback whales,
And to hug a rock in which dinosaurs sleep.

And - one sunny summer morning
He will disappear on foot.
Leaving no shadow behind.

"Looking for Ways to Beat the Weeds" is a recent article in the NYT by Carl Zimmer that looks at the way agricultural plants can evolve weediness.

Scientists have documented three different ways that plants evolve into weeds. Many species, such as barnyardgrass, evolved from wild ancestors. Biologists have found that certain traits make it easier for wild species to become weeds. They already grow fast, for example, and make lots of seeds.

Parasitic plants are especially well-suited to the weedy life. They wrap around other plants and send their roots into their hosts’ tissues. Rather than making their own food, parasitic plants steal nutrients from their hosts. The parasitic weeds that invade farm fields have not evolved major differences from the ones that attack wild plants.

In other cases, weeds evolved from the union of wild plants and crops. In the 1970s, for example, wild beets in Europe released pollen that fertilized sugar beets growing on farms miles away.

Crops can even turn into weeds. “We domesticated a plant from the wild, and somehow it de-domesticated itself — which I think is pretty exciting,” Dr. Caicedo said.

Among these crops gone wild is a weed known as red rice. A key step in the domestication of rice was breeding plants that held onto their seeds when farmers harvested them. Red rice evolved fragile seeds that broke off and fell to the ground.

The name red rice comes from the russet tinge that the plant evolves as it becomes a weed. Dr. Caicedo and her colleagues suspect the color is produced from a pigment that helps the seeds go dormant — a trait that’s good for a weed but bad for a crop.

“If you’re a farmer, you want your seed to start growing when you plant it,” Dr. Caicedo explained. When weeds produce seeds, on the other hand, some sprout quickly while others go into suspended animation. Those dormant weeds create a seed bank that can sprout later, when conditions may be better for them. “It’s a fantastic trait for a weed to have. You’re hedging your bets,” Dr. Caicedo said.

These de-domesticated weeds don’t simply go back in time to regain the same DNA as their wild ancestors, scientists are finding.

Once plants become weeds, they keep evolving. New mutations allow some of them to have more offspring than others. Foxtail, for example, evolved to crawl along the ground, where it wouldn’t be destroyed by combine blades.

Here is a poem by Gary Snyder from his book Turtle Island (1975).

In June two oak fell,
rot in the roots

Two yellow, edulus
"edible and choice."
only I got just so slightly sick --

Taste all, and hand the knowledge down.

* The entire poem is an allusion to Ezra Pound's "The flavors of the peach and the apricot are not lost from generation to generation. Neither are they transmitted by book learning."

* Quoting Snyder from the same volume: "Know the flowers."

* Know the flowers, by what name? And which system?

* Can there exist a botany without books & book learning?

* Foragers only trust other foragers who have tried things for themselves. Who know the where and the what and the how of plants.

* All foragers all moralists.

* Find your own flavours and hand them down to the next generation. 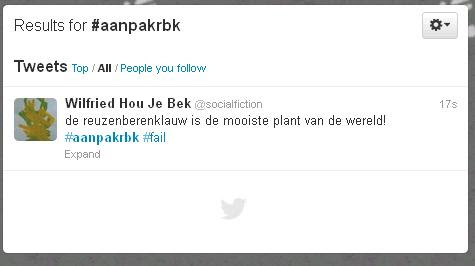 City authorities are calling on us to report sightings of the Giant Hogweed. I do get it, they spread aggressively and are able to dominate whole area's. They may however not be that toxic as often said. I have also on hearsay that they are edible (flowers,stalks) after boiling. There is a hashtag but not much reporting has been done. Har Har.
op vrijdag, juli 05, 2013 Geen opmerkingen:

Like in 2012 (plus overview) I will try to record all species of wild plants that I find growing in my street (excluding grasses and mosses). I will also attempt to be slightly more methodological this year by only including plants when they are in flower and I will sort them by month. Also: I now have a new camera and it find that it is better in doing close-ups but worse in landscape pics so expect more of the former.

The weather has been unusual so far. It hasn't been insanely cold but It has been freezing well into April and there was little plant growth to report until the weather changed last week and a number of plants rose to the occasion. As you can see, apart from the dandelion, they are all white, small and fragile in appearance. Less then two weeks later however these plants are already vanishing from view, remaining like the last eruptions of a flu-virus. Other plants, ones that need a little more time and sun are now starting to show itself. 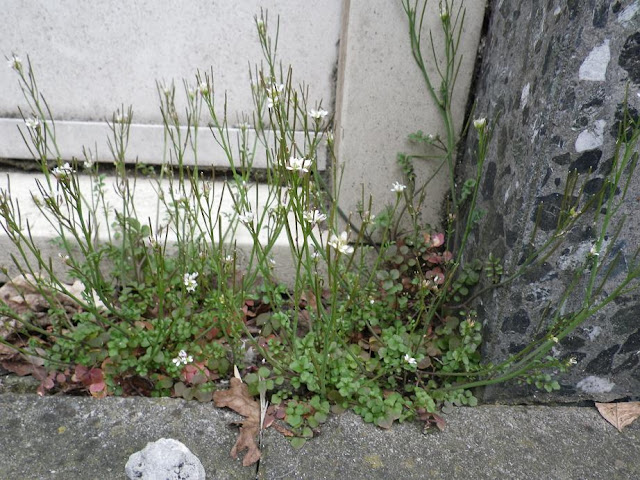