How to read Cookbooks

Here are two interesting papers on how to engage with historic cookbooks by historian Barbara Wheaton. One is called: A Structured Approach to Reading Historic Cookbooks, the other is Finding Real Life In Cookbooks: The Adventures Of A Culinary Historian.

She especially has my attention when she writes about how to approach ingredient-lists and what questions can be asked about them:

Cookbooks tell us more about the repertory of ingredients than anything else. An inventory of the foodstuffs called for in a single cookbook can be compared with a list of commonly used Western foods. Thus, one can get a sense of how much variety in the diet there may be in the course of a year, and how opulent or impoverished the kitchen addressed by a particular work may be. When seasonal availability is taken into account, even a long list of ingredients may not be enough to prevent inadequate variety in the depth of winter, or in the *starving season* of springtime. The list may well begin to reveal how the food is obtained. Some books are plainly rural, while others are urban. Amelia Simmons, in her American Cookery, begins her discussion of peas with recommendations about what varieties to plant, while Eliza Acton, writing in her Modern Cookery, is concerned with helping the housewife not to be cheated by her greengrocer. Urban cookbooks are much more likely to measure food quantities by price -take 3d. worth of salt fish- or -a punnet of strawberries- rather than by amount. The rural kitchen is supplied by a flock of poultry in the barnyard, by the kitchen garden, by barter with local people, and by hunting, fishing, and foraging. The urban kitchen is visited by a multitude of ambulant vendors who sell seasonal foods, and herd flocks of goats (ready to be milked at the door), as well as meat pies and other baked goods. Street markets, covered markets, and shops bring a much wider variety of ingredients to the city dweller than to his or her country cousin. It must be added that, by the nineteenth century, there is a much greater concern with the adulteration of foods in the cities. A more general question must be asked: What proportions of the most commonly-used foodstuffs are obtained within and outside of the
cash economy?

The ingredients repertory displays economic and geographic patterns and raises questions such as: What are the points of origin of different food plants and animals? How long have they been present in the region represented by the cookbook? Which are the luxury ingredients, which are the staples, and which are the foods of the poor, or famine foods?

Here, I should point out a caveat: the mere mention of an ingredient does not guarantee its availability. In the past, as today, some cookbook writers seem to feel obliged to call for esoteric ingredients to demonstrate how recondite are their tastes. By the nineteenth century, the repertory expands: canal transportation, then the railroads, and finally steamboats greatly improve the selection of foodstuffs available in most parts of Europe, the United Kingdom, and North America. Pineapple and coconut, for example, are featured in Eliza Leslie's cookbooks published in Philadelphia in the second quarter of the nineteenth century. By shortening the time spent in transit, the railroads in particular did much to improve the quality of foods sold in urban markets.

The 'Sioux Chef' on the Map

A nice piece came my way via Twitter: "The 'Sioux Chef' Is Putting Pre-Colonization Food Back On The Menu" about Sean Sherman, cook and student of the ethnobotany of his own Oglala Lakota tribe. I like projects like these. Map your Recipe, a website that can find the fruits and vegetables in a recipe and show where they were domesticated, was created with the intent of analyzing exactly such things. I do not have Sherman's recipes of course but using the gallery page from his website it is possible to get some of his ingredients. Here is what happens when you put them on the map: 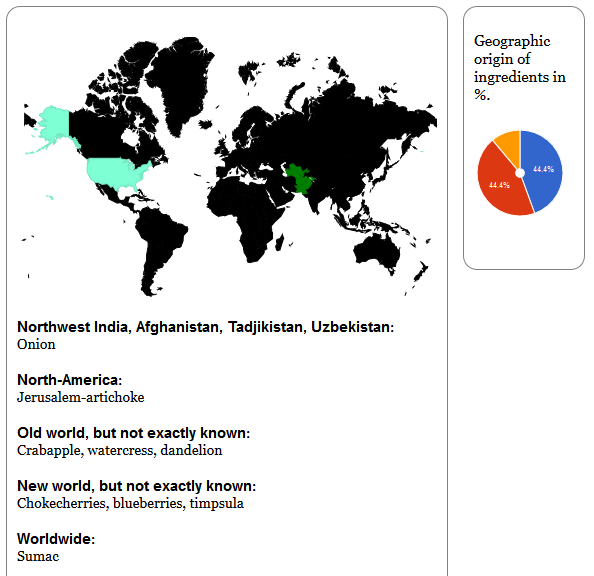 The graph on the right shows that for these few ingredients as many are native to the new world as are native to the old world. The second thing that is immediately clear is that most of these plants were never domesticated at all.

But what does this mean in regard with the claim of Sherman cooking food from before pre-colonization? As I have been saying all cooking is fusion cooking and the origin of an ingredient has nothing to do with authenticity (the pizza is no less Italian for using the South American tomato). In this case it is even more interesting because it is perfectly feasible for a 17th/18th/19th century non-colonized prairie Lakota to eat plants brought to the continent by European invaders. This is the point made by Alfred W. Crosby in his book Ecological Imperialism. A plant like the humble dandelion was preparing the ground for the European onslaught long before they themselves got that far west.

My great plains anthropology is sketchy but it is to be remembered that this was a way of life made possible by the horse, a European animal. The various nations (or even empires) of plain Indians who learned how to re-domesticate (and later breed) feral horses in order to live out on the prairie are among few recorded examples of formerly sedentary people becoming nomadic. Their way of life was a creative and successful response to new pressures and new opportunities. It makes sense that this creativity would also act on new plants. It is part of their genius. The map is a way to show this.
op woensdag, oktober 08, 2014 Geen opmerkingen:

One can take a random recipe, like Jamie 'proper delish' Oliver's rainbow salad wrap, and look up the year each ingredient entered the English language. It would result in the following etymological timetable: 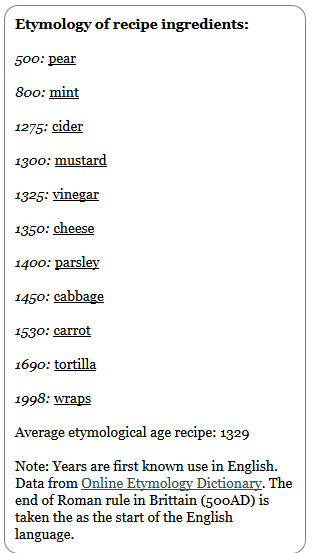 With this data you are able to calculate the AEAR or Average Etymological Age of a Recipe. As the word 'average' says it is derived at by dividing the grand total of years by the number of ingredients. For Oliver's salad wrap the AEAR is a respectable 1329. It is bogus, of course, but it is a way to add a metric to recipes (or entire cookbooks) that few will have experimented with. With good reason I hear you say.

The following graph shows the AEAR of 77 historic cookbooks published between 1390 and 1936. In those 546 years the AEAR went up with only 220 years. The vertical line is for AEAR, horizontal is for year of publication of the cookbook. 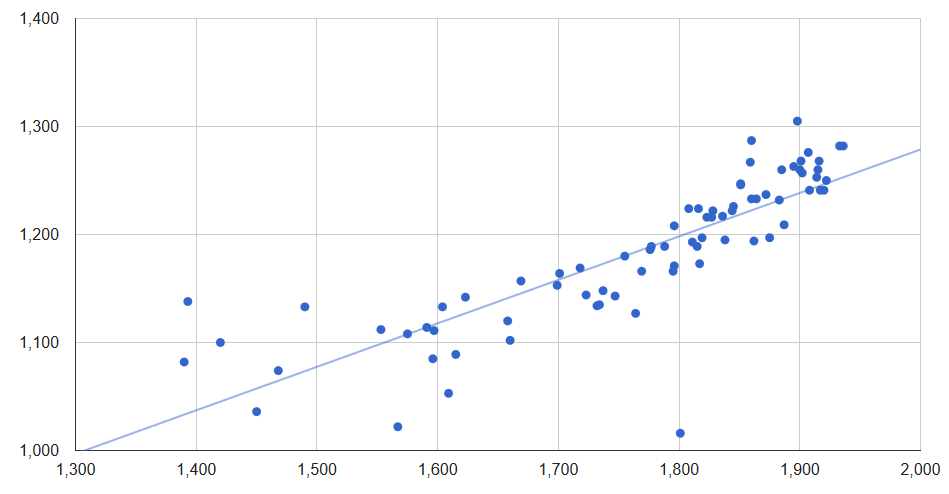 For the period after 1936 cookbooks within the public domain are scarce but for with a little help from our friends from the Pirate Bay we can add Nigella Lawson's Express (2007). The trend line does not move visibly but the book is way above the trend. She scores a AEAR of 1359. Between 1390 and 2007 (so between the Forme of Cury and Nigella Lawson), a period of 617 years the AEAR went up 326 years. These numbers one could once again compile to calculate relative growth rates per decade or century but this I will leave to a PhD with the time and the inclination who can than proceed to theorize about punctuated etymological equilibriums. 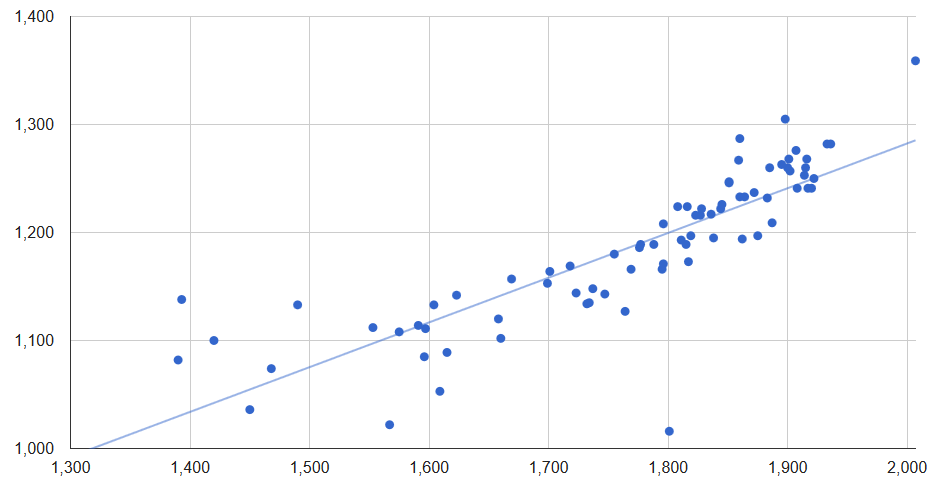 The challenge is this: who can find the newest and the oldest recipe as measured by AEAR?


Can you beat the AEAR of this recipe for "Teriyaki tofu wrap with macadamia roasted garlic spread" which is an impressive 1461?!

Map your Recipe can calculate.