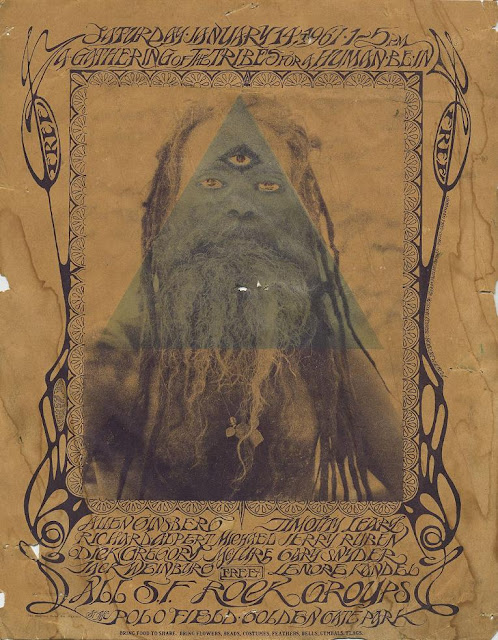 The 1967 Houseboat Summit (earlier) had Timothy Leary, Allen Watts, Allen Ginsberg and Gary Snyder discussing the future of the psychedelic revolution which at that time was about to merge with/into the Back to the Land movement. Much is about drugs, religion and conciousness but a curiously large segment of the discussion deals with the need to learn the practicalities of homesteading; how appropriate it again seems now the 40 year love-affair with the city is collapsing. According to Charles Perry's book on the Height Ashbury this was quite the event at the time and while he states that not everybody may have read it, the transcript was definitly a thing to have and to keep. Against self-styled guru Leary (who appears completely out of his depth) Gary Snyder comes across as the much-respected outdoors-man with a philosophy: the dark mountain mobster who is listened to. But I may be biased.
The following two quotes by Snyder are taken from the transcript. From the first quote we learn how to live and that Snyder himself got through college by dumpster diving. The second quote tells about the need to learn from the native people, the gist of this was included here earlier.

Well, this isn't news to anybody, but ten or fifteen years ago when we dropped out, there wasn't a community. There wasn't anybody who was going to take care of you at all. You were completely on your own. What it meant was, cutting down on your desires and cutting down on your needs to an absolute minimum; and it also meant, don't be a bit fussy about how you work or what you do for a living. That meant doing any kind of work. Strawberry picking, carpenter, laborer, longshore...Well, longshore is hard to get into. It paid very well. Shipping out...that also pays very well. But at least in my time, it meant being willing to do any goddam kind of labor that came your way, and not being fuzzy about it. And it meant cultivating the virtue of patience -- the patience of sticking with a shitty job long enough to win the bread that you needed to have some more leisure, which meant more freedom to do more things that you wanted to do. And mastering all kinds of techniques of living really cheap... Like getting free rice off the docks, because the loading trucks sometimes fork the rice sacks, and spill little piles of rice on the docks which are usually thrown away. But I had it worked out with some of the guards down on the docks that they would gather 15 or 25 pounds of rice for me, and also tea...I'd pick it up once a week off the docks, and then I'd take it around and give it to friends. This was rice that was going to be thrown away, otherwise. Techniques like that.

...we used to go around at one or two in the morning, around the Safeways and Piggly Wigglies in Berkeley, with a shopping bag, and hit the garbage can out in back. We'd get Chinese cabbage, lots of broccoli and artichokes that were thrown out because they didn't look sellable any more. So, I never bought any vegetables for the three years I was a graduate student at Berkeley. When I ate meat, it was usually horse meat from the pet store, because they don't have a law that permits them to sell horsemeat for human consumption in California like they do in Oregon.


If you're going to talk this way you have to be able to specifically say to somebody in Wichita, Kansas who says, "I'm going to drop out. How do you advise me to stay living around here in this area which I like?"

All right, say I want to stay where I am. I say, okay, get in touch with the Indian culture here. Find out what was here before. Find out what the mythologies were. Find out what the local deities were. You can get all of this out of books. Go and look at your local archaeological sites. Pay a reverend [sic] visit to the local American Indian tombs, and also the tombs of the early American settlers. Find out what your original ecology was. Is it short grass prairie, or long grass prairie here? Go out and live on the land for a while. Set up a tent and camp out and watch the land and get a sense of what the climate here is. Because, since you've been living in a house all your life, you probably don't know what the climate is.

Then decide how you want to make your living here. Do you want to be a farmer, or do you want to be a hunter and food gatherer? You know, start from the ground up, and you can do it in any part of this country today...cities and all...For this continent I took it back to the Indians. Find out what the Indians were up to in your own area. Whether it's Utah, or Kansas, or New Jersey.