Urban land use as a dart board [permaculture edit] 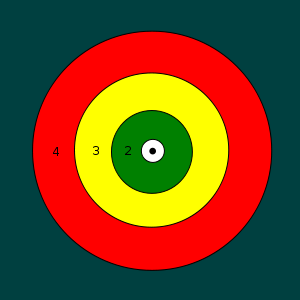 Johann Heinrich von Thünen's (1783-1850) urban land use model goes like this: In the middle is a black dot that represents a city and which is surrounded by zones: 1 (white) dairy and market gardening; 2 (green) forest for fuel; 3 (yellow) grains and field crops; 4 (red) ranching; the outer, dark green area represents wilderness "where agriculture is not profitable". Globalization has rendered this model (idealized as it was) less obvious but you can see where it is coming from and it is also where permaculture wants to go back to; 0: the home, 1: the home garden; 2: the home orchard; 3: the farm, 4: the managed forest; 5: the wilderness. The above model has four zones plus wilderness (5 together) while the permacultural zoning plan below has six zones including the wilderness but the distinction between home garden and home orchard perhaps complicates things needlessly.

Both models visualize land as a dartboard (or a mandala) but personally I prefer the first land use model because it explicitly puts no end to the wilderness; it's what civilization is attached to. I like to be on the oche and throw my darts at the wall rather than at the board.

The marginal area next to (and really behind) the board is also important.
op dinsdag, augustus 23, 2011