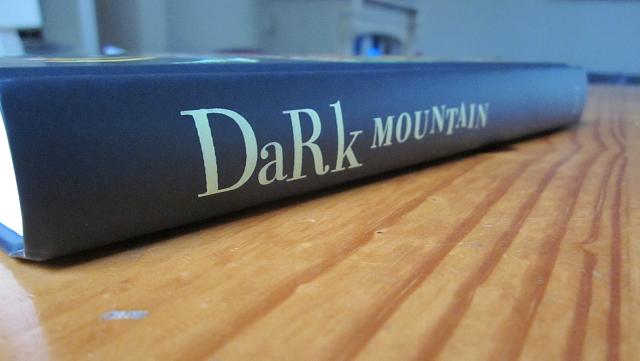 The Dark Mountain project, founded by Dougald Hine and Paul Kingsnorth in 2010, challenges both the lethargic state of current day environmentalism and the lacklustre political conservatism of contemporary literature with one sweeping trumpet call to arms. It analyses the greening of capitalism, the rise of sustainability as just another buzz-word, as a doomed attempt by a doomed system to save itself with half-measures. It calls on literature to come up with new stories of who we are and where we need to go as the first important step to find a way out of the deadlock where technology, politics and storytelling come together to uphold a system that has environmental destruction as its inevitable product. Dark Mountain describes alternatives scenarios to a political and economic system which has almost reached the point where there is no more room for the problem to be pushed forward into the future.
Dark Mountain started as a manifesto, led to a festival and a book in 2010 and consolidated itself in 2011 with another festival and another book. The crowdfunded Dark Mountain book two is a proper hardback and contains almost 50 pieces by about 40 writers covering a gamut of forms: short stories, essays, non-fiction pieces, interviews with literary heroes of Hine and Kingsnorth, and poetry. The quality is consistently high, even the poetry is good and somehow the principles of Dark Mountain and its call for 'uncivilization' managed to bring together a ragbag of a few recognizable names, a selection of urban bloggers, academics and literati, and completely obscure back-to-the-land types that together make up for a consolidated and well-rounded overview of a world view and a way of life based on experiment and observation rather than ideology and power-mongering. A sizeable number of the articles are from people trying to live as farmers, gardeners and foraging, writing about them with self-critical perspective. The writing is solid and grounded in place, uninterested in being spectacular or flashy, there are no attempts to write experimentally (and rightly so as this mostly means copying Gertrude Stein or William Burroughs) but there are a few openings where style and content are realised in novel ways. A good example of this is Thomas Keyes' recipe that also tells the the story of the sourcing of the (foraged) ingredients, the tasting, and the reason for living like he does while his children prefer to go to Burger King and he sometimes goes with them. A number of writers choose to write about the place where they live and work, about themselves as part of that place, about their personal history, the things that made them what they are today in that mode of soliptic musing that usually is a revolting mixture of quasi-poetic melodrama and sentimental self-justification but here it works: that is how good the writing is.
Dark Mountain gets dismissed as a hippie revival wherever an internet site discussing it offers a discussion forum and it is not hard to see why that is. Dark Mountain is the first cultural movement since the hippies that is seriously thinking about food and where it comes and especially where it is going to come from when society will fail. The key concepts for Dark Mountain are survival, bioregionalism, hunter-gatherers, urban foraging. The concepts that defined the critical cultural movements of the last 40 years, from punk to brat-pack are absent: boredom, alienation, apathy. Dark Mountain is the first counter-cultural movement in 250 years that defines itself through work rather than through clothing styles, drugs or music. Are we really that fucked?

Seriously: Dark Mountain Book two is a landmark publication with only one weakness and that is the piece that I wrote, but surely you have it in you to ignore those 6 pages out of 300.
op maandag, augustus 29, 2011