The cryptoforest with the strange hut 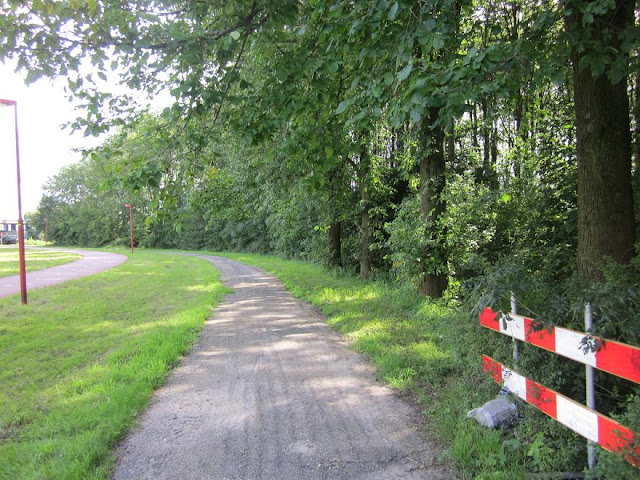 In the first chapter of his 1968 best selling book 'Desert Solitaire' Edward Abbey's describes the first time he woke up in the Utah desert: "this monstrous and inhuman spectacle of rock and cloud and sky and space, I feel a ridiculous greed and possessiveness come over me. I want to know it all, possess it all, embrace the entire scene intimately, deeply, totally, as a man desires a beautiful woman. An insane wish? Perhaps not-at least there’s nothing else, no one human, to dispute possession with me.”
This strikes me because it is completely different from the way I experience my own feral forested pockets of crypto-wilderness. The cryptoforest does not inspire any grandiose feelings. Never did I feel the need or the desire to possess the forest, platonic or otherwise. I am seeking for inhuman spectacles but what attracts me to these places is the way the human influence asserts itself even at places that most normal choose to ignore. Cryptoforests are mysterious places but not always in a good way: the lack of humans itself is reason enough to be used by people who prefer to remain anonymous. At least two murder victims have been at the kind of places I visit in the last year alone. I stumble across tents that are in use and waste that is new. I have never met the people who lived in those tents but they may not be friendly. It doesn't scare me but I am aware of the full spectrum of possibilities. Small town blues: my biggest fear is that while I am hidden from view someone steals my bike.
Last weekend I explored a forest that lines the outer elbow of double barrelled traffic system regulating the flow of traffic in and out of the North-East of Utrecht. It's a pool of open space against its crowded outlying surroundings. From whatever you direction you enter it you find that your horizon is suddenly shifting into the distance and for this reason I had wanted to look at it with a bit more patience for years. Inside this oval shaped space, bordered by a bicycle and foot paths, rail tracks and the backside pond of an allotment garden stands a forest of mature trees (poplars?) densely clustered and with bushes preventing a good view from the outside to the inside of the forest. I dare not estimate the size of it but it did seem larger from the inside than from the outside: an ever recurring visual phenomena that informs the differences between the psychogeography of the forest and of the plains.

The pictures I took all came out badly and this indicates the uncertainty I felt about how to understand what I was seeing and my inability to find a way to relating to it. It wasn't monstrous, it was more anthropomorphic than that, it was like being trapped at a party where you fail to understand the social norms while your clothing is revealing you as a uninteresting outsider. I was an intruder and one without a good reason or story to tell when asked for credentials. This is a feeling I encounter often but never as strongly as here. The pattern escaped me, the trees just seemed to grow tall and the underbrush proliferated, a lone fern had spread like an umbrella and they all had turned their back on me at the moment I walked in. There was no question of me wanting to embrace it, instead it was embracing me, without love, just matter of factly like a disinterested nurse washing a patient. I found a shallow ditch that I couldn't explain at first but which was maybe carved out by excess water of the pond at the back when it rains. I saw frogs, a rabbit hole, heard crows... but no sense and no order, not even chaos. No sign of "Memory and desire, stirring" (after TS Elliot), just a void that wanted to be closed.
The thing that really spelled out the implied message of this cryptoforest was a human artefact that I don't know how to explain and which turned out unobliging towards my attempts to make pictures of it. I was trying to record it in its environment but the trees prevented a good view. Instead I only have details. What it is? A deep hole filled with water and infested with mosquitoes, a wooden structure with a plastic sheeting and chicken wire fallen into it, and above it tree trunks interlocked as if to create a roof. All this surrounded by nettles and sapling trees, indicators of disturbed soil. As if someone illegally kept chickens here. But why would you?

This cryptoforest with the strange hut refused to speak to me but I know it has a story to tell. I will go back and coax it out. 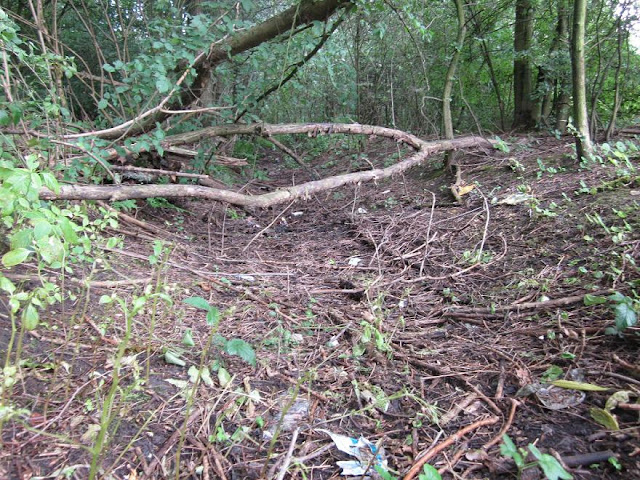 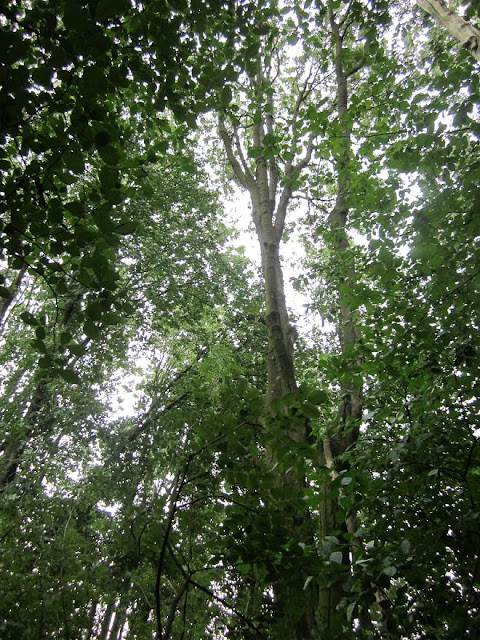 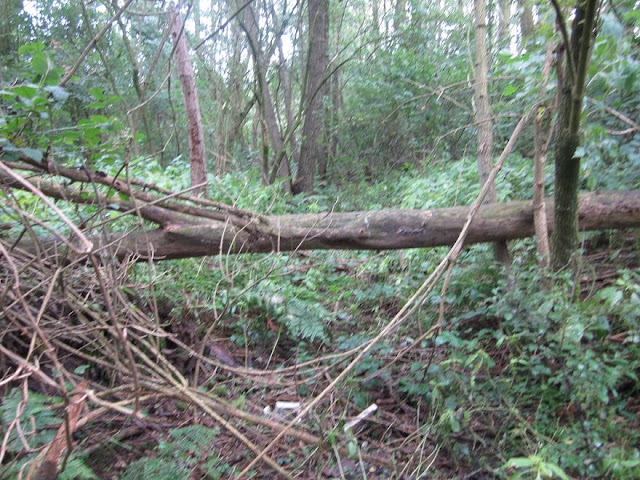 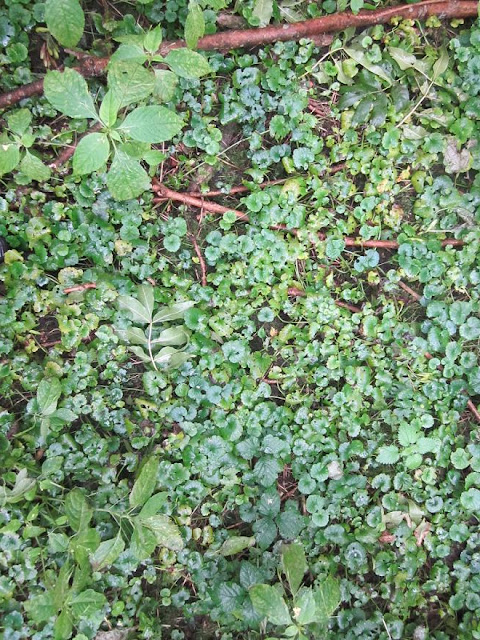 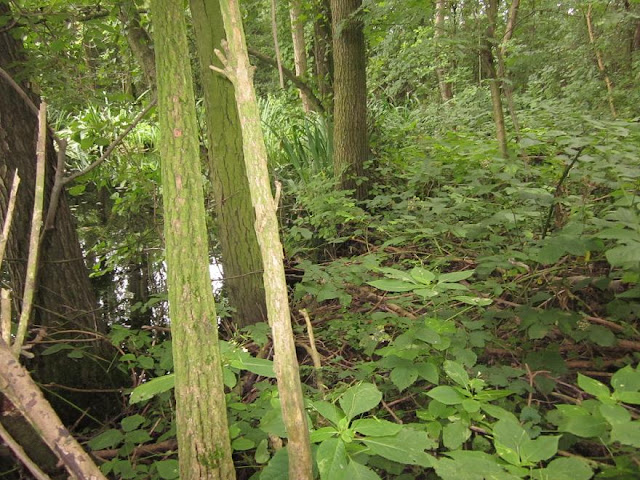 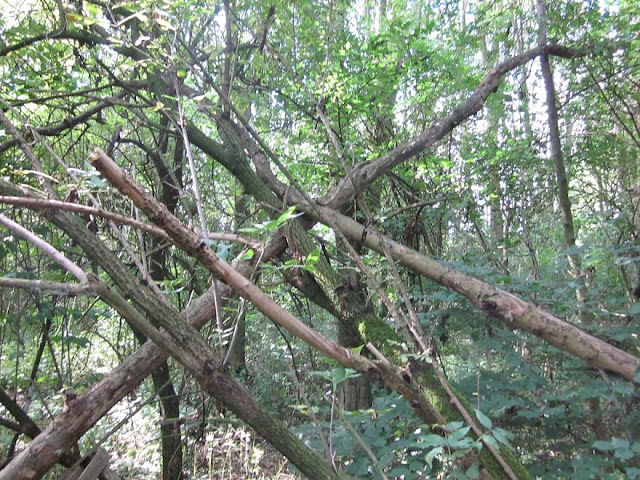 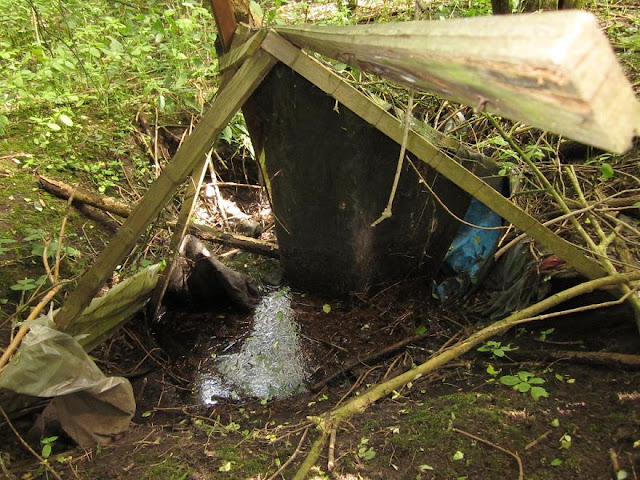 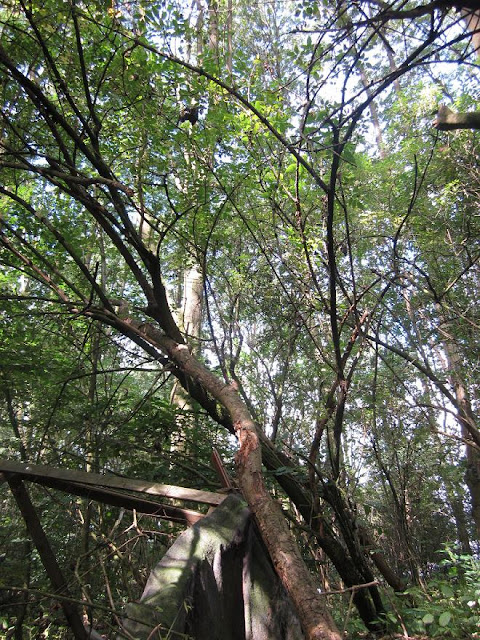 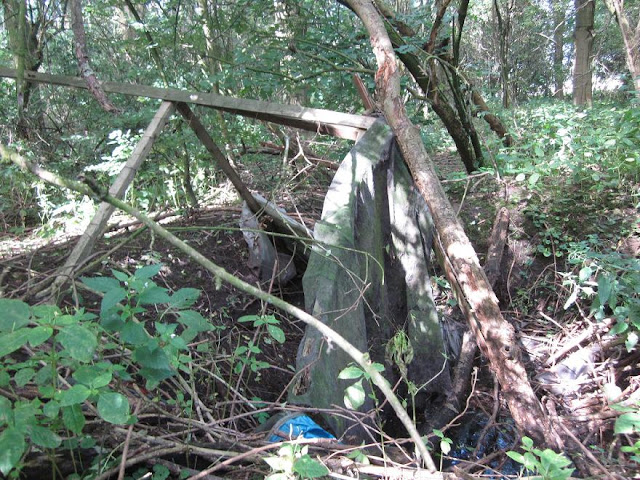 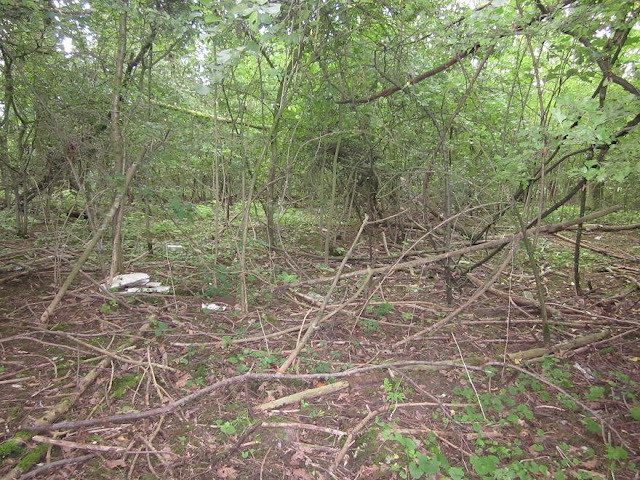 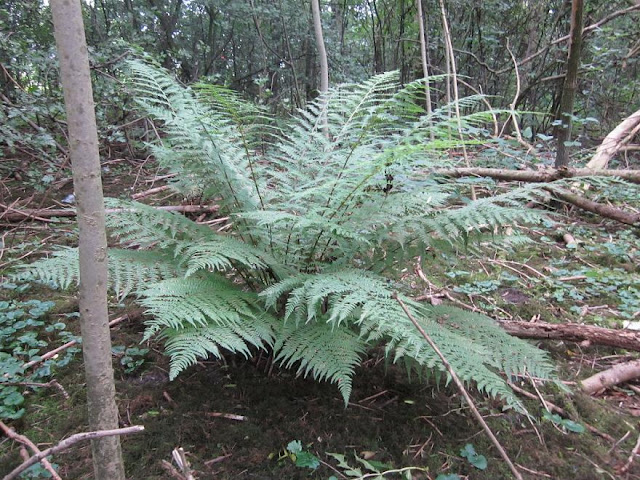 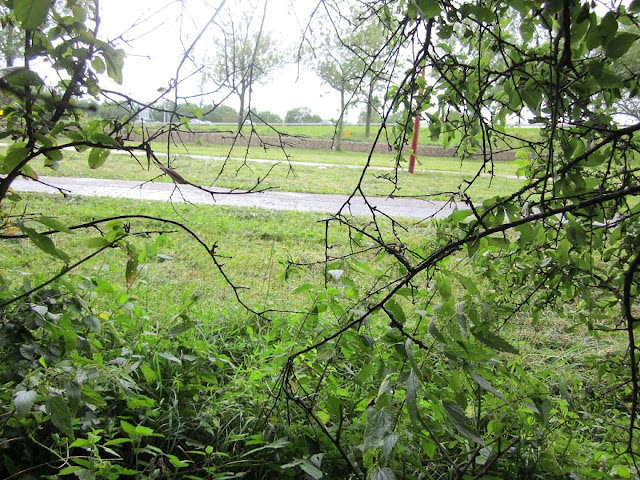