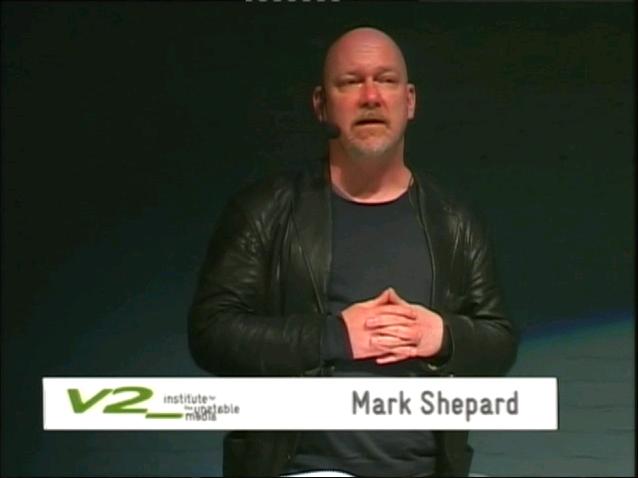 On request of Dutch architecture website Archined I wrote a little review of the book launch of Mark Shepard's recent 'Sentient City: Ubiquitous Computing, Architecture, and the Future of Urban Space' (MIT Press) at the V2. I was intending to travel to Rotterdam but as there was a live-stream I stayed at home to watch it on screen. The subject used to be close to my heart but right now I would never attend anything having remotely to do with such things: I have had enough of them. After the rise and fall of the imaginary locative media lab (2003-05) and my own equally fascinating and exciting but equally doomed Crystalpunk Workshop for Soft Architecture (2007) and a few other events and projects in between the entire internet-of-things/augmented reality/locative media range of ideas and projects smell like short-sighted techno-fetish careerism and arty fartsy surveillance chic in ludic preparation for the aggregating police state. The people I met in association with the above projects were almost always terribly gifted and the tech implementations can be great in a grass-roots professional way but to my mind it all remains so bloody dull conceptually: putting a chip here and a GPS device there, tagging this, mapping that... I want to experience the city as an Eskimo experiences the Arctic not as a programmer experiences buggy code. But the set of issues addressed are important and pertinent to almost everybody's lives and so I welcomed the opportunity to step outside my own micro-niche bubble for a few hours and revisit these ideas.
Calling a city sentient is an easy thing to do but impervious to a precious definition. The term 'sentient city' overstates its case I think and when Shepard writes that "the city is sentient in the sense that it has a communicative potential" you know this to be true. Sentience is about the awareness of pain (and joy) not about communication. The KIller of Kirkwall showed compassion in the sense that he didn't beat his poorly old mother every day. Putting pedantry (my special gift) aside, I did enjoy the evening's focus on the correlation between locative media and the public sphere. This came out best in the talk by Martijn de Waal who used the classic social democratic rhetoric on public space as a stabilizing and creative force in the open society to offer his take on 'sentient technology'. His approach to locative media was to regard them as a new medium for investigative journalism, as partisan research that, when down properly, goes beyond mapping and reporting and becomes public property as it fires discussion and engages people into actors rather than consumers. It is not an earth shattering observation but it was well rehearsed and somehow it warmed me to the possibilities.
Watching a conference stream turned out to be a great exercise in voyeurism. The audience shots I thought especially fascinating with people rolling their eyes and pulling long faces.  Between the face shots you find some of the notes I typed down during De Waal's talk. I do apologize to the three speakers (De Waal, Mark Shepard and Michiel de Lange): it must be terrible to watch yourself in such pics, they do nobody justice. 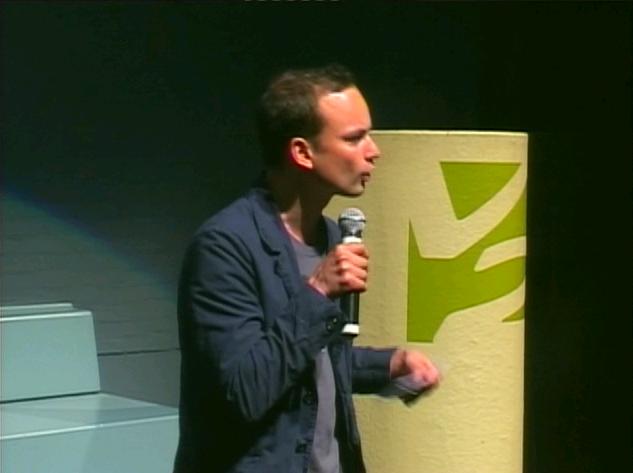 How is the sentient city changing the way we deal with the city?

Sentient technology: as a match between city (public space) and virtual space ( the other public space)

The youtube documentation is more important than the real event : international pillow fight day but also Syria and Egypt 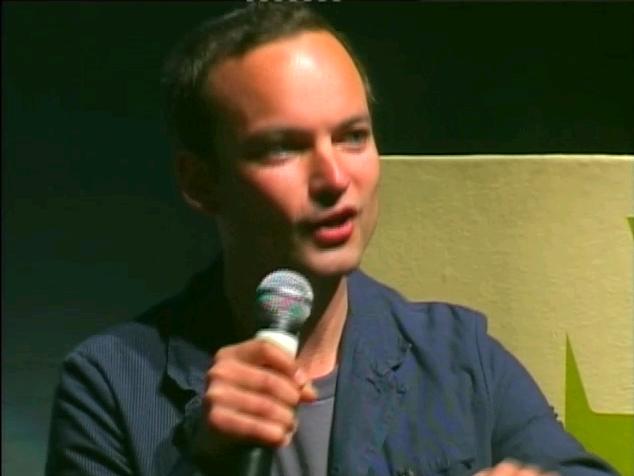 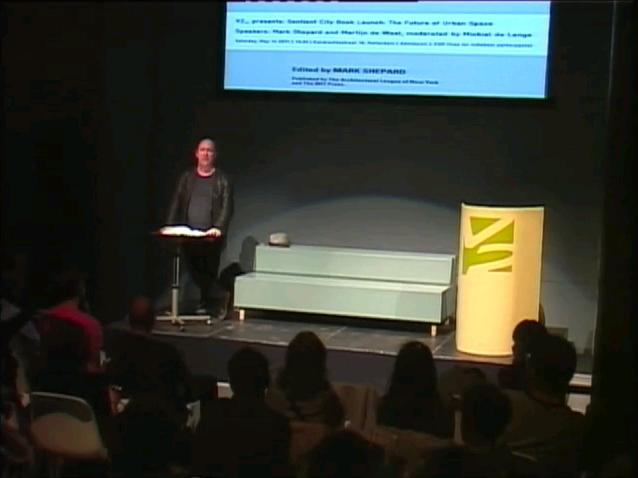 Urban public sphere: Jane Jacobs: great cities are not like towns but larger.

The basic condition of the city is that we don’t know most people.

At times we need to relate to them and deal with them.

This is what urban space is doing. 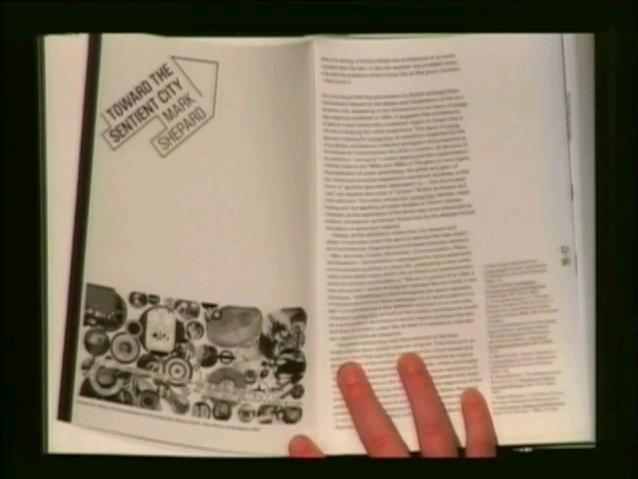 Because of urban spaces we can live together.
Public sphere = public performance.

So far these places have been physical: bringing people in physical contact.

Quoting Habermas: the public sphere is a product of the industrial revolution with the newspaper as the central mode of communication. 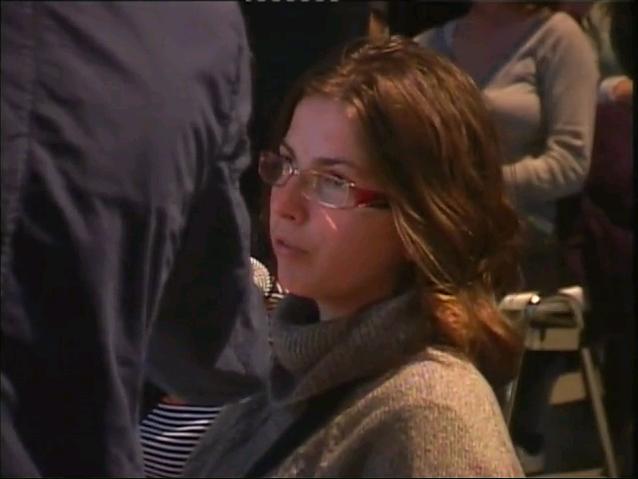 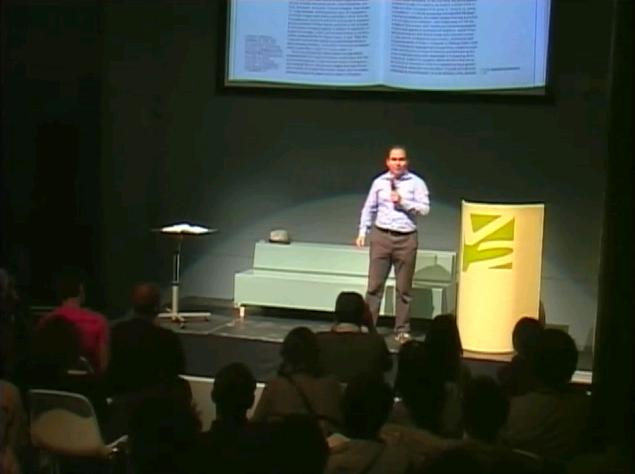 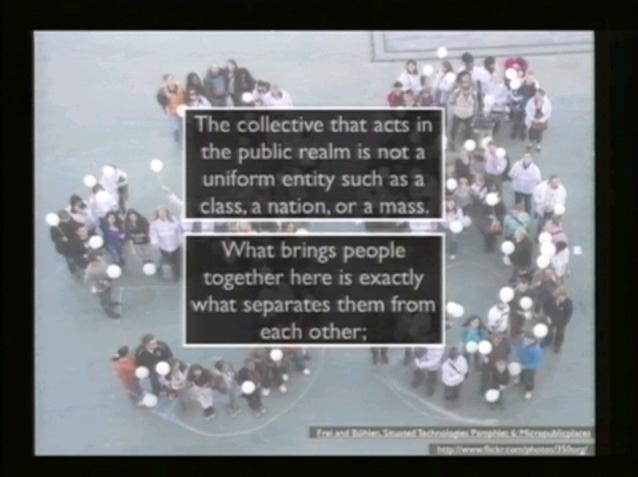 Public sphere was invented in London coffee houses.
How can sensing and aggregating technologies be used to organized publics.

Bringing back issues to the public (waste, pollution, etc)

How do you from mapping to engaging public (interface)?

How to create something you can interact with. 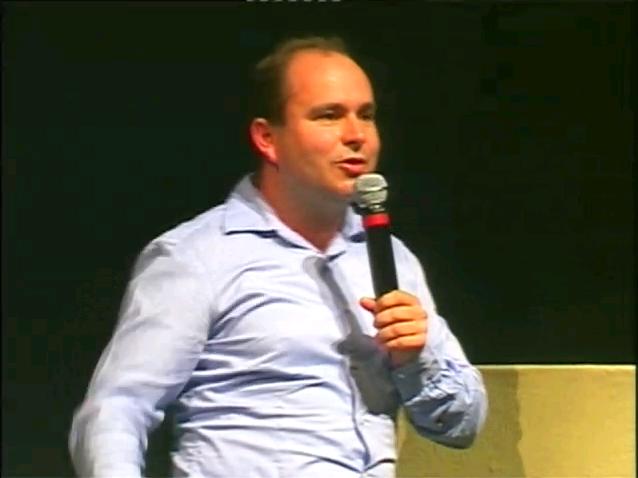 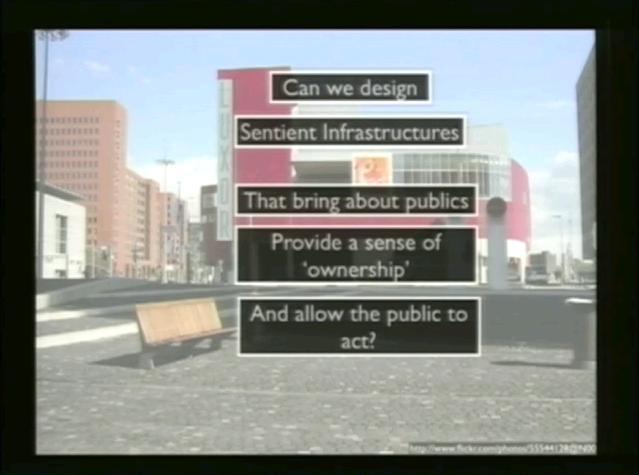 Question: I think the public sphere is created through social action: are you not manipulating the sphere rather than making it?

Answer: architecture has always done this: like Jane Jacobsen arguing for small blocks in grids to enlarge the possibility of random encounters.

Is an architect creating volumes of space or a creating social interactions?

Q: Are you not overstating the function of the architect? 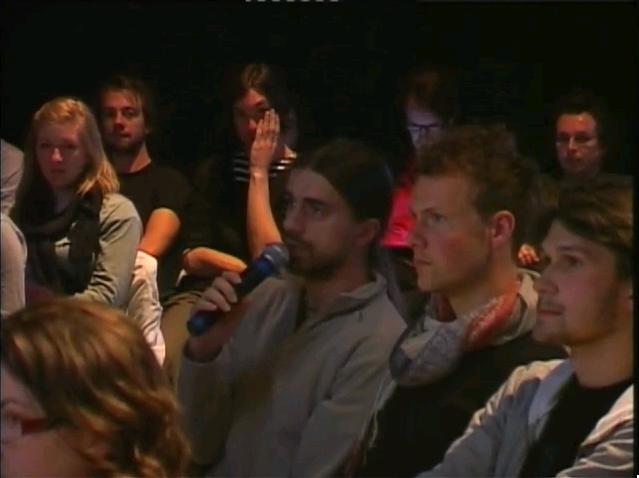 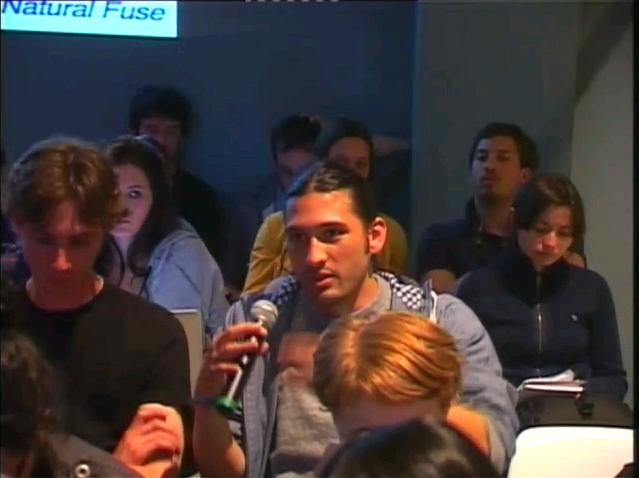 The evening then moved into a longish debate about the role of the architect the profession's equivalent to the question how many angels fit on the point of a needle and I opened a beer.
http://www.sentientcity.net
http://www.situatedtechnologies.net/
http://www.martijndewaal.nl/
http://www.bijt.org/wordpress/
http://www.themobilecity.nl/
op donderdag, mei 19, 2011