UU [Unitary Urbanism] in the forest 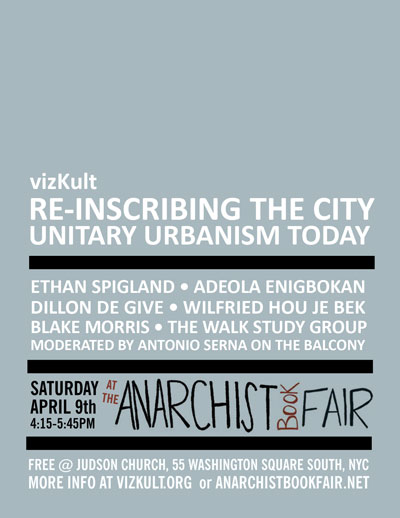 Next Saturday (April 9th) I will be linking up with the Anarchist book fair in NYC via Skype to participate in the "Re-Inscribing the City: Unitary Urbanism" forum. It will be weird to be there without actually being there but I hope to be useful. The other speakers promise to be highly interesting, the coyote walk project by Dillon de Give seems extremely to the point in particular.

I did have to look up 'Unitary Urbanism' to remind me myself what it was, again, and well, well, well... look what I found, in continuation of a better reading of old and neglected texts, hidden in a unassigned 1959 Situationist text on Unitary Urbanism:

UU is opposed to the temporal fixation of cities. It leads instead to the advocacy of a permanent transformation, an accelerated movement of the abandonment and reconstruction of the city in temporal and at times spatial terms. We are thus able to envisage making use of the climatic conditions in which two major architectural civilizations arose -- in Cambodia and in southwest Mexico -- in order to construct moving cities in the jungle. The new neighborhoods of such a city could be constructed increasingly toward the west (which would be gradually reclaimed as one goes along), while to the same extent the east would be abandoned to the overgrowth of topical vegetation, thereby creating, on its own, zones of gradual transition between the modern city and wild nature. This city, pursued by the forest, would offer not only unsurpassable zones of derive that would take shape behind it; it would also be a marriage with nature more audacious than anything attempted by Frank Lloyd Wright. Furthermore, it would advantageously provide a mise-en-scene of time passing over a social space condemned to creative renovation.

Other key UU texts are its basic program and Debord's seventh chapter.