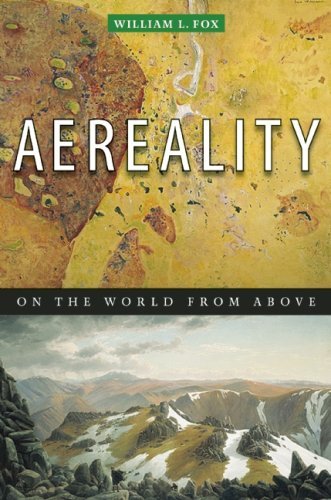 Aereality reads like a scene by scene transcript of somebody explaining a documentary to his blind aunt.
William L. Fox's 2009 book would have been a great documentary: now it reads like a first draft that falls at least 10 drafts short of a worthwhile book while it could have been so great.
"The author flies over various earthworks, urban sprawls, and natural wonders by various means--helicopters, hot air balloons, and prop planes--searching for the cognitive roots of our aerial imagination, all with the ultimate goal of knowing and experiencing the earth from the air."
The design is great, the plates are great, the subject is on many people's mind, it probably is the only book of its kind, and any attempt to explain the world and the mind we use to understand it by using art (historical, contemporary American and Australian Aboriginal) and psychogeographical drifting has my sympathy but this book fails to make impact: like a rock that crumbles and pulverises in your hand before you had a chance to take a good look at it.
Fox also writes wine labels and this excellent interview with him on that on the Edible Geography blog pointed me to this book.

Barry Miles, in the 1960ties, knew everybody worth knowing and he writes about it with authority, knowledge and a sense of perspective. That part of this book he covered before in another book which I read when I was staying with Nick in Berlin (you know the title?). The rest of this book is just baaahaaad. The chapters on punk are so-so and obviously written as an outsider, what comes after is shamelessly stupid and uninformed: Boy George! Spandau Ballet! Damien Hirst! as counter culture? Gimme a break. Its worse than nostalgia, its reactionary propaganda. A waste of money. It's not worth giving a list of the things he misses from 1980 onwards because he misses everything. You Bloody hippie!!
op dinsdag, april 26, 2011