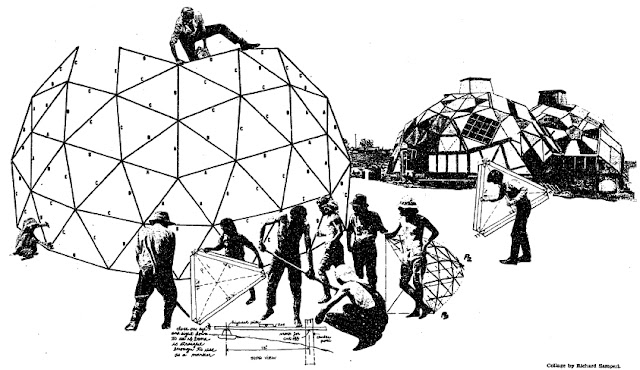 It is impossible to define drop city. It fell out of a window in Kansas three years ago and landed in a goat pasture near Trinidad, Colorado. At first droppers lived in tents and tarpaper shacks. And then other began to see the same vision and began making things.Geodesic domes. Now there are sixteen to twenty Droppers living in ten domes and as many different ideas of what Drop City is as there are droppers.

We have attempted to create in Drop City a total living environment, outside the structure of society, where the artist can remain in touch with himself, with other creative human beings.

We live in geodesic domes and domes of other crystalline forms because the dome shape is easier to construct. We live on a subsistence level and almost entirely scrounge the materials for our buildings. All materials are used. Car tops, cement, wood,plastic. The cheapest and least structural of building material are structurally sound when used in a true tension system.

We can buy car-tops in Albuquerque, N.M. for 20c each. We jump on top of a car with an ax and chop them out, stomp out the back glass, strip off the mirrors, and pull out the insulation. All of it can be used to cover a large dome for the small cost of about $30.

We have discovered a new art form: creative scrounging. We dismantle abandoned bridges by moonlight. We are sort of advanced junkmen taking advantage of advanced obsolescence. Drop city was begun without money, built on practically nothing. None of us is employed or has a steady income. Somehow we have not gone hungry, or done without materials. Things come to us.

America, the most affluent waste society. There is enough waste here to feed and house thousand works of art. To the townspeople in Trinidad, five miles away, we are scroungers, bums, garbage pickers. They are right. Perhaps the most beautiful creation in all Drop City is our junk pile. The garbage of the garbage pickers.

Drop City is a tribal unit. It has no formal structure, no written laws, yet the intuitive structure is amazingly complex and functional. Not a single schedule has been made, and less than three things have come to vote. Even though Droppers rarely, if ever, agree on anything, everything works itself out with the help of cosmic forces. We are conscious of ourselves and others as human beings.

Each dropper is free. Each does what he wants. No rules, no duties, no obligations. Anarchy. But as anarchistic as the growth of an organism which has its own internal needs and fulfils them in a natural, simple way, without compulsion.

Droppers are not asked to do anything. They work out of the need to work. Out of guilt or emptiness the desire to work, hopefully, arises. If it is no longer work, but pleasure. Doing nothing is real work. We play at working, It is as gratifying as eating or loving. We are based on the pleasure principle. Our main concern is to be alive.

Droppers come in all sizes, shapes, colors: painters, writers, architects, panhandlers, film-makers, unclassifiables. Each has its own individual endeavours and achievements. These perhaps tell what we are doing more than anything else. But they cannot be enumerated. They have to be seen, read, touched, heard. They speak for themselves. But we do all have this in common - whatever art we produce is not separated from our lives.

The Droppers have printed a comic book called The Being Bag. We welcome the feds and postal inspectors who come to harangue us about its content. Our poet looks forward to the inspectors and their reading of his work.

Droppers make movies, black-and-white wind poems, flickering TV beauties with the subliminal delights of pulsating Coke ads, the crystal-molecular good sense of a dome going into time-lapse, and the grunting goodness of sex. We have two movies on Drop City for distribution.

The second week in June we held a Joy Festival. The First Annual Drop City Festival and Bacchanal Post Walpurgis and Pre-Equinox overflow and dropping. Over 300 people attended. It was a freakout in all media, 96 hours of continues mind-blow.

We want to use everything, new, junk, good, bad, we want to be able to make limitless things. We want videotape recorders and cameras. WE want computers and miles of color film and elaborate cine cameras and tape decks and amps and echo-chambers and everywhere. We want millionaire patrons. We need the most up-to-date equipment in the world to make our things. We want an atomic reactor.

Drop City the first attempt to use domes for housing a community. Buckminster Fuller gave us his 1966 Award for "poetically economic structural achievements." We hope to buy more land, build more Drop Cities all over the world, the universe. Free and open way stations for every and anyone. Living space and heat can be made available to all at a fraction of the present cost through application of advanced building techniques such as solar heated domes. Already Drop City is firmly established near Albuquerque, N.M.

Drop city is Home. It is a strange place. An incredible webbing of circumstance and chance, planning and accidents, smashed thumbs and car-tops. We are not responsible for what and where we are, we have only taken our place in space and light and time. We are only people who want love, food, warmth. We have no integrity. We borrow, copy,steal and and all ideas and things. We use everything. We take things, we make things, we give things.

Drop City pivots on a sublime paradox, opposing forces exist side by side in joy and harmony. A psychedelic community? Chemically, no. We consider drugs unnecessary. But etymologically, perhaps. We are alive. We dance the Joy-dance. We listen to the eternal rhythm. Our feet move to unity, a balanced step of beauty and strength. Creation is joy. Joy is love. Life, love, joy, energy are one. We are all one. Can you hear the music? Come dance with us.

Drop City is one of the more famous of the numerous back-to-the-land free communities that emerged from the middle 1960ties onwards throughout the US. I found it in "Notes from the New Underground", a 1968 anthology collecting several important texts and writers from that period. This text catches the feel of the time well I think, it also catches the childish inconsistency that is the first thing I normally associate with hippies. Simon Sadler has a good account (PDF-link). 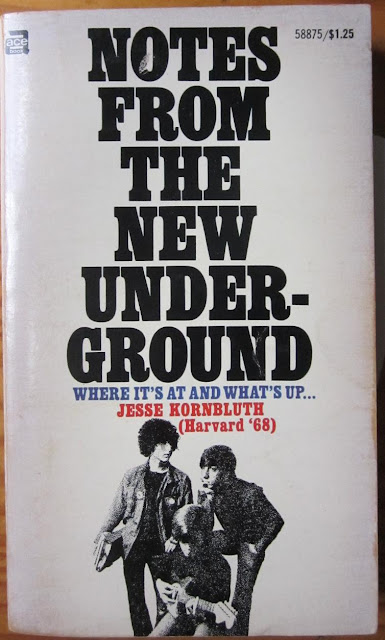