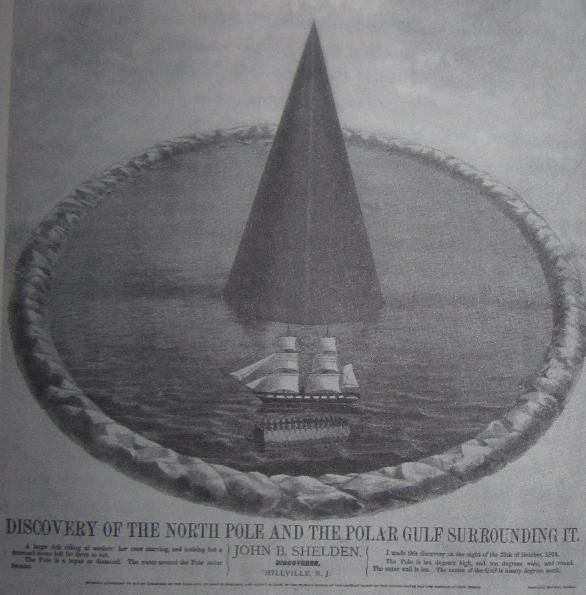 THE NORTH = A POINT EXPRESSING AN IDEA WHOSE TIME HAS PASSED

"Right under the Pole there lies a bare rock in the midst of the Sea. Its circumference is almost 33 French miles, and it is all of magnetic stone. And is as high as the clouds, so the Priest said" - Mercator (1577, IMAGE E)

"As the magnetic needle which points to the north necessarily indicates thereby the south, so the power disposing to rest has necessarily a counteracting influence disposing to mobility, between which lies the point of indifference" - Samuel Taylor Coleridge (1848)

"I suppose this desire to reach the North Pole is only a piece of vanity" - Fridtjof Nansen (1897, IMAGE F; first polar magnetic observations)

"The two poles wander independently of each other and are not directly opposite each other on the globe. They can migrate rapidly: movements of up to 40 km per year have been observed for the North Magnetic Pole" - Wikipedia (2012)

THE NORTH = THE NAVIGATIONAL TAR PIT

It is really hard to know what the earth is doing, but we do know that it must be doing something.

The Real North wobbles [IMAGE C], the Magnetic North drifts [IMAGE B], the North Star shifts in and out of focus [IMAGE D]. Eventually all places will be a North Pole of some description for some time.

Psychogeophysics is the art of knowing a place for a million years and finding ways to compress that knowledge into a shareable experience.

The North Pole is like the moon, a symbolic place to wave flags and risk your life [IMAGE G].

The North is a point everywhere but here: let's move a little closer [IMAGE H] with a compass in hand, Polaris in sight, following declinating path[s] as we assume all former states of Northern Poleness to exist simultaneously, as forking paths confused and amalgamated, our directions calculated by threated #brainfuck loops. A .walk that wobbles and drifts with the earth itself.