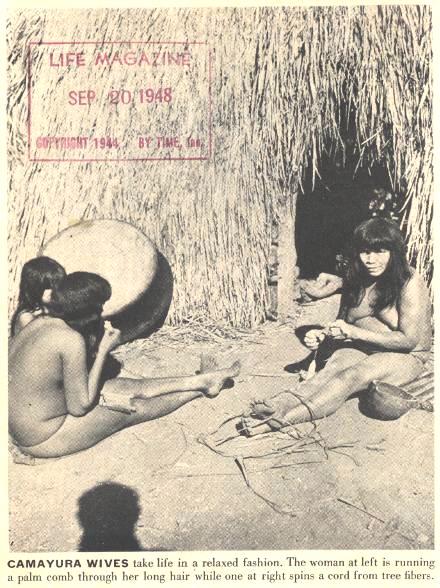 The first pages of Adrian Cowell's account of the expedition to the geographical centre of Brazil in Xingu, 'The Heart of the Forest' (1960) contain a number of paragraphs that deserve to be added to the slowly building compendium of quotes dealing with the jungle as a psychological agent (earlier quotes include: Huxley, Descola, Duguid and Bates, Conrad, Carpentier and Villas Boas). Pics from Cowell's later book on first contact with the Kreen-Akrore are here. Looking at the forest in the wrong way gives a terrible headache...

As we passed, the trees were actually pressing in on either side of our path were mere stunted growths on a patch of open ground. They gave an impression not unlike an abandoned English orchard. But over their spindly shapes it was possible to see where the 'high forest' grew behind, in great masts of wood that soured up from the ground and burst into arrogant superstructures of branches, lianas and leaves. These trees were beyond all European imagination. The dominated the land. They encircled and loomed above us. Like high voltage pylons near an industrial town, they conveyed the impression of power that could not be seen. And each of us was very conscious that beyond those trees there were millions of others which, together, formed a force that was inimical to man. It was a waste of limitless jungle broken only by patches of barren bushland.
...
If a city man is required to describe a tapir or panther, he tries to portray it from what he has seen in the zoo. But not so to the Indian of Xingu. When asked he would invariably imitate the animal's call. "That mummmm, muuuummmm," he would say for a puma. And soon I realized that in the forest where the range of vision could be limited to five yards, a hunt of an hour would proceed without sight of the prey till that final moment when, camouflaged by branches and undergrowth, a bullet would be fired into something that was barely distinguishable as part of an animal. The jungle is a world of ears.
...
I crept quietly, looking no further than my footsteps, and aware that strange things seemed to be peering at me from the darkness. I forced myself not to think about them. If the monsters of imagination stalk by one's side, it is hard not to look left and right, and I had already learnt that peering about in the forest made my eyes slow to see and react. The constant effort of focusing and refocusing between lianas a few inches from my nose, through a maze of tangled branches at varying distances to an object some hundred yards away, brought nothing else than a stabbing headache. It was better to walk 'carelessly', like the Indian, with eyes specifically on the ground and generally everywhere, watching not for colour or shape, but registering in split-second attention any movement within an arc of 250 degrees. By not 'looking' in front, the Indian seems to catch movement behind. And though at first I had attributed this to sixth sense, I later realized it was an instant reaction to something to which every part of his senses were turned. Movement. It is betrayal in the forest.