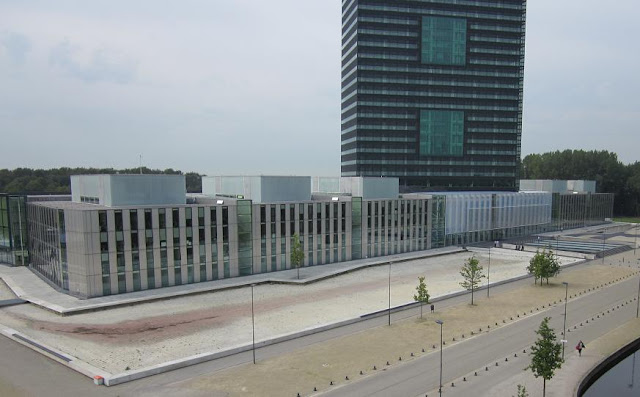 The Embarrassment of Weeds (an eye-witness account).
Because cryptoforestry does not pay the rent I also keep (and by the end of the month: used to keep) a part-time job with a governmental agency located in Westraven, the area that is also the cryptoforest hotspot of Utrecht. My office is a twenty-two-storied tower block flanked by two additional lower wings and surrounded by a paved ornamental pond that should be filled with water but currently isn't. And this is where the cryptoforesters gloating begins.
The two years old pond is a landscaping piece meant to add topical grandeur to a prestigious architectural redevelopment. The paving is done with light and dark grey stones of average size, laid out in a breezy wave pattern and presumably some bullshitter of an artist (or rather a bunch of German landscape architect bullshitters: Hey! Do want to add the pictures below to your portfolio??) cashed in handsomely for this "silver platter" 'design'. The trouble started when the water that was pumped in from a nearby stream started to suffer from algae that very swiftly covered the water with a thick dark green mat. An applause resounded through the building when the first ducks arrived but elsewhere in the office angry telephones were most probably made to the contractor. It was spring and the smell that came of it was foal. After a week or two, three man arrived in a minibus and they spent three whole days wading through the knee-deep water, dragging the algae ashore, creating a huge pile of the stuff next to the main entrance. The water was clear again, but, of course, as every one with a brain could have predicted, you can't possible remove algae this way. Very soon, at exponential rates, the water was again covered with a layer of waterweeds as thick as the first time. Add a few more weeks and the minibus returned. This time four man spent three days amassing a pile of vile smelling algae but with the same final result, very soon the water was hidden from view again. To my regret I never made any pictures of all this. After this they tried with new water but with no better result. The water was pumped out and that was it.
After standing dry since winter, the pond became a beautifully varied patchwork of weeds growing through the cracks this summer. I am not a botanist but I have counted at least 15 different species, nettles, grasses, flowering plants, all coming knee-high, showcasing a rich palette of forms and colours. A spectacular sight but an unwelcome one as the minibus returned, this time to mow. I really should get a camera because I missed all this as well. After a month or so, the vegetation was back, not as high, the summer was nearly gone, but the pictures below give a good impression of its variety: it really is a spontaneous garden with a resilient beauty all its own. But I wish I could show you what it looked like in summer.
The pond is probably not deep enough and maybe there is excess heat from the building itself or the basement, whatever the reason, it seems a fair bet to say that the pond is really a pond scum incubator. It will be haunted by 'weeds' forever. My observation covers only the first year. The roots below the pavement are now well established, the plants have found the easiest ways through the cracks and now they will start to challenge the structural order of the pavement. The pattern in the pavement is already smudged, and the paving will wobble, opening spaces for the sprouting of bigger plants and even trees. Only brute measures can scare the forest away now. I have often noted that architects, designers and their ilk like to be complimented, and that they especially like to compliment themselves. If anything turns out to be wrong with their work there is always somebody else to blame. Go read about Rem Koolhaas for an example. So I suppose this is all my fault, well, thank you, my pleasure.
This tragedy of the underbrush is being played out in the front yard of the governmental agency in charge of the Delta Works, amongst many other crucial infrastructural works, and this is why it is especially embarrassing. My job never gets me near people in the know but I hear the shame whispered, the feared ridicule implied in blandly formulated asides in email communications. Because the question is: would you hire a contractor to built the defences the country will rely on against rising sea-tides if they are unable to do a simple ornamental pond?
In the realm of symbols, the weeds are the great disruptors.
"Underneath the pavement the beach", said the situationists: reality is more interesting: "Through the pavement the Cryptoforest". 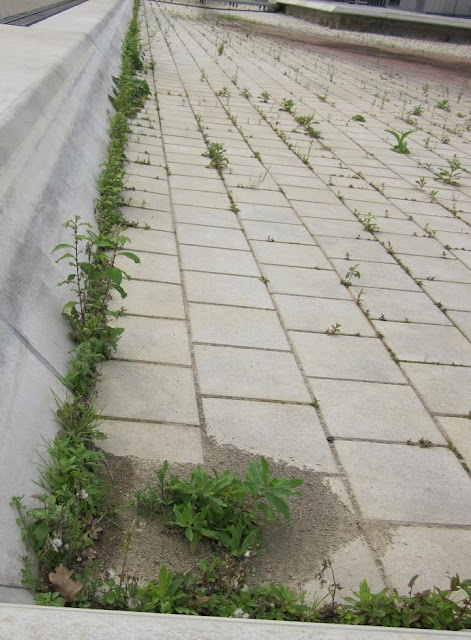 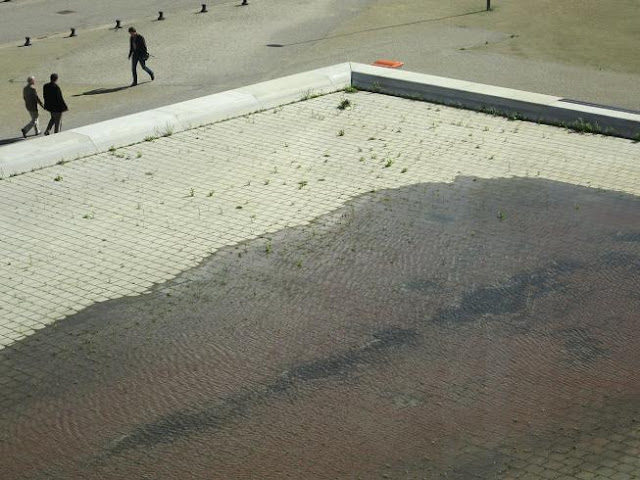 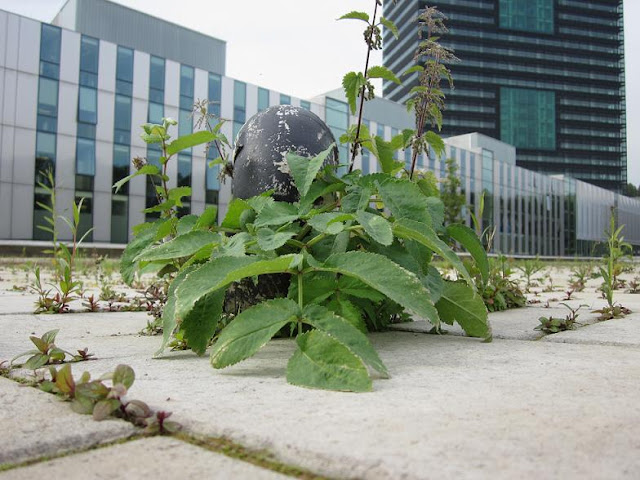 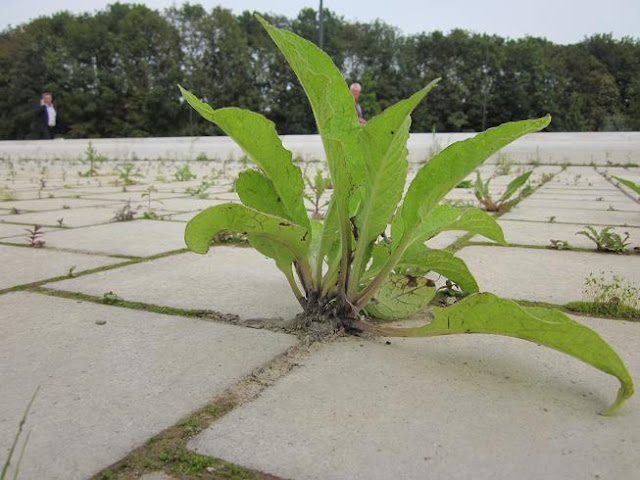 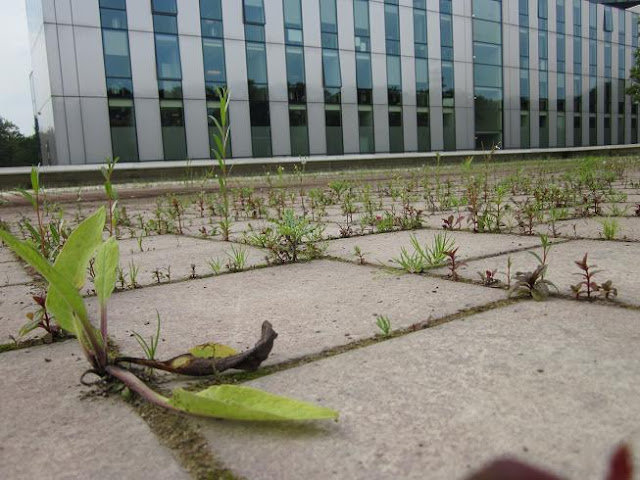 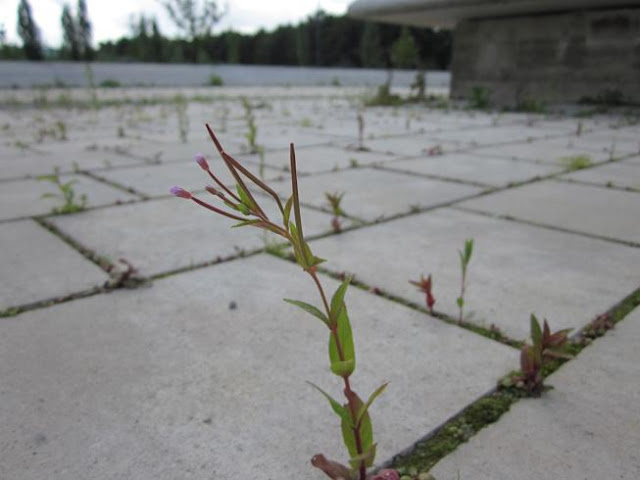 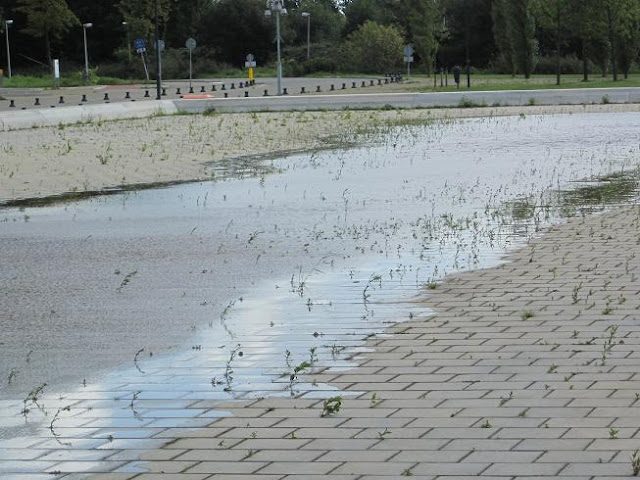 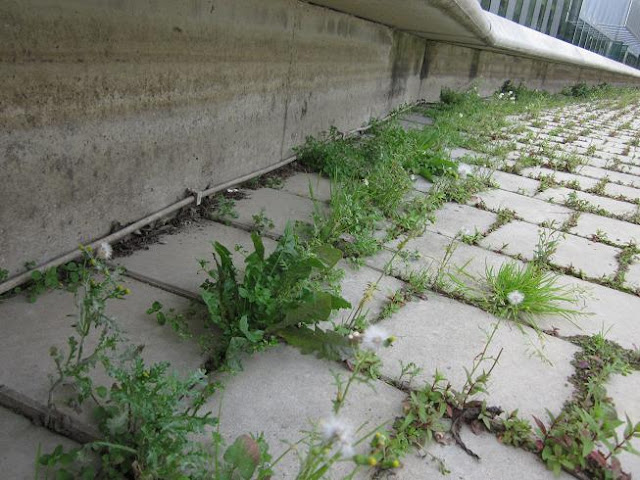 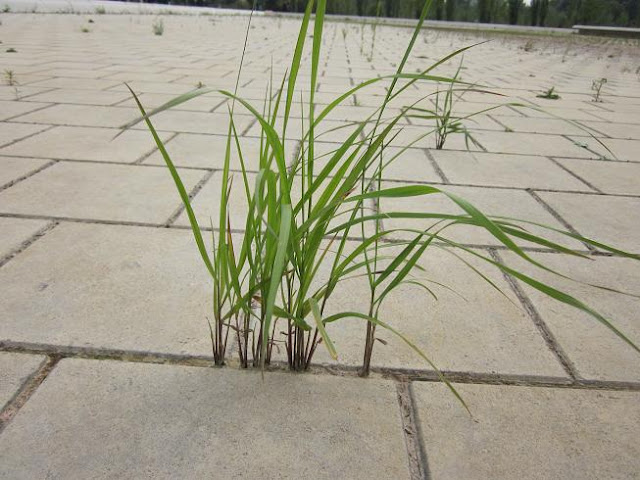