Getting lost is not an option.

Some snippets concerning wayfinding and knowledge management in the Amazon. 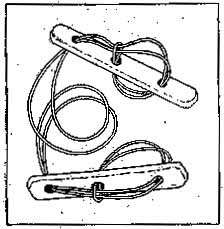 Listen to Walter E. Rothe (An Inquiry into the Animism and Folk-Lore of the Guiana Indians):

If an Indian loses his way in the forest, the Spirit is the cause. The Caribs, however, know how to circumvent the latter, by making a string puzzle, which is left on the pathway: the object of this puzzle consists in removing, without cutting or breaking, an endless string from off two sticks upon which it has been placed. The Spirit coming along sees the puzzle, starts examining it, and tries to get the string off: indeed, so engrossed with it does he become, that he forgets all about the wanderer, who is now free to find the road again. In this connection, it is interesting to note that Bates speaks of his Indian boy, on the lower Amazon, making a charm to protect them from the Curupari: "For this purpose he took a young palm-leaf, plaited it, and formed it into a ring which he hung to a branch on our track."

The Curupira or Curupura is a male supernatural being who guards the forest in Tupi mythology in Brazil.

He usually takes the form of a boy with (literally) flaming hair and green teeth. His most startling characteristic, however, is that his feet are turned to face backwards.

Its raison d'être is to protect the forest from the destructive habits of man. It happily tolerates those who hunt for food but is infuriated by those who hunt for the pleasure of it and will lay traps and confuse them so that they become eternally lost in the forest. His backward feet, for example, have the effect of confusing hunters who may try to follow his tracks.


Some people say that his eyes are red and glowing; others mention his large ears and his curved fangs, similar to those of a jaguar. An evil stench surrounds him and attrachts many large blue butterflies (Morpho) and other insects. All people agree that his feet are twisted, the toes pointing backwards and the heels forward. His knees have no joints, and should he fall he has difficulties in getting up again.

The Boraro has his maloca in the dense forest... much of the time he spends wandering in the forest, sometimes accompanied by his wife, described as a horrible hag with only one breast.

Occasionally a hunter will come upon a disturbance in the closed-canopy forest, a gap not created by man. These spots are called mirunye poe, the wind's gardens; people avoid them because thes eplaces are visited by the Boraro.

With a little (?) lateral thinking it is not that had to see a connection with the forest giants of Vico, who also lived in a gap in the forest and whose name was mistranslated into one-eyed. Listen Neil L. Whitehead (Cartography in the traditional African, American, Arctic, Australian, and Pacific societies) on the no-need for maps:

In Achuar culture, the concepts of left and right are only used to indicate an immediate and relative position, longer distances being expressed in the time it take to cover them. Beyond a local destination, travel time is counted in days or simply 'very far,' since the events of a temporally extended journey are unpredictable. Distance is measured for architectural purposes but not for travel. To give directions to a place that has not been visited before, people use a system of landmarks that are common across the Achuar habitat and that can be read by anyone. Waterways are structuring elements of this system, but their use requires individual experience of at least a section of that system. By these means, any Achuar can delineate a portion of the network, either in linear fashion, by enumerating successive rivers, or transversely, as if the rivers were being crossed while walking. A given settlement, necessarily built along a waterway, is therefore easily found because it can be fixed using these riverine coordinates. Away from this system, more arcane markers are used to map the environment: a peccary wallow, a salt lick, a soucre of pottery clay or stands of notable flora. Landmarks like these are encountered by returning hunters and help to build and sustain an active knowledge of the spatial characteristics of the environments. Perhaps just as important, "getting lost" is not the disaster it would be to those culturally dependent on cartographic representation. In the absence of this kind of mapping, basic survival skills and orientation techniques are sufficient to see most travellers home.

The same book is the source for the following images. 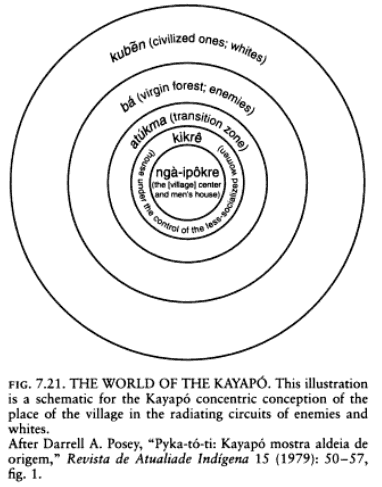 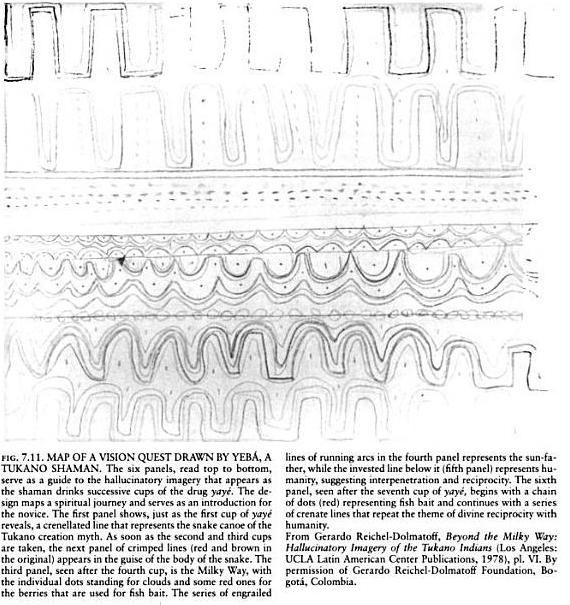 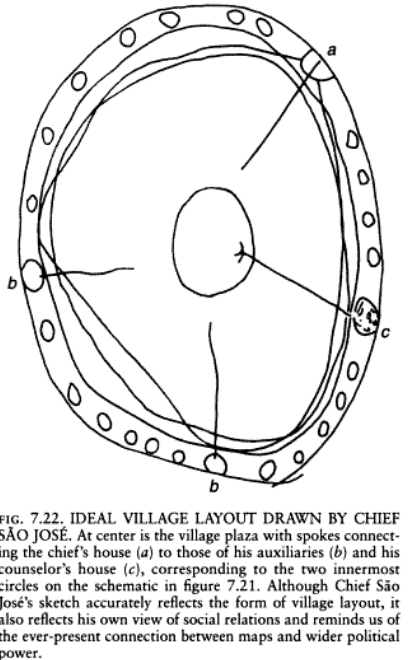 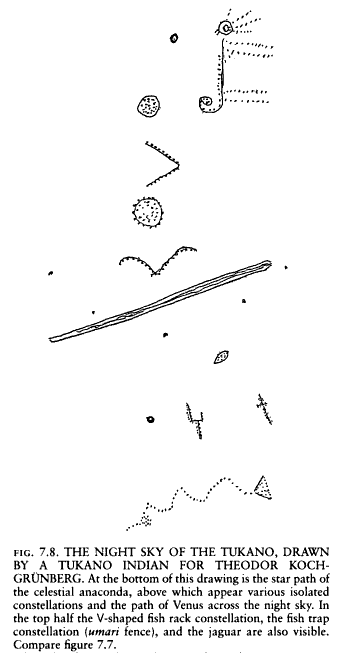 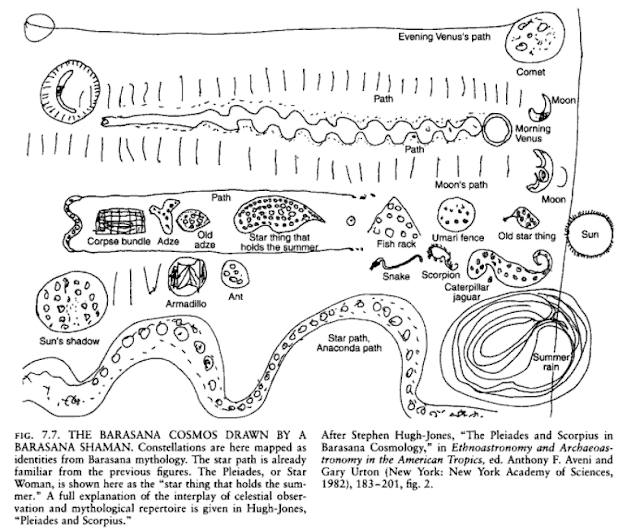 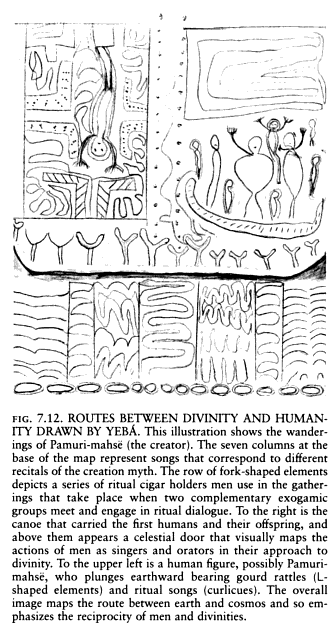 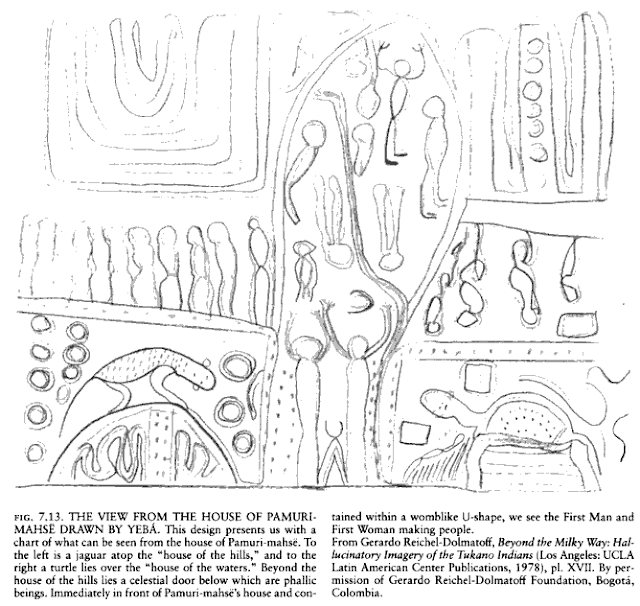 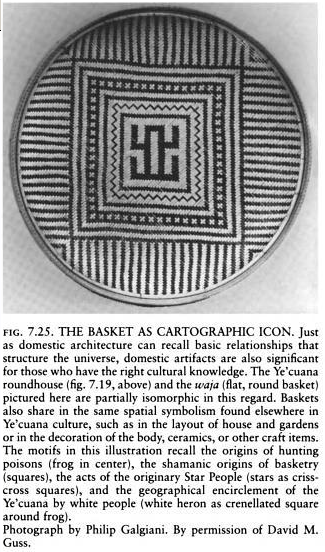 The following image comes from Peter G. Roe's The Cosmic Zygote it is a map/diagram of the multi-layer world the Shipibo convey in their mythology. 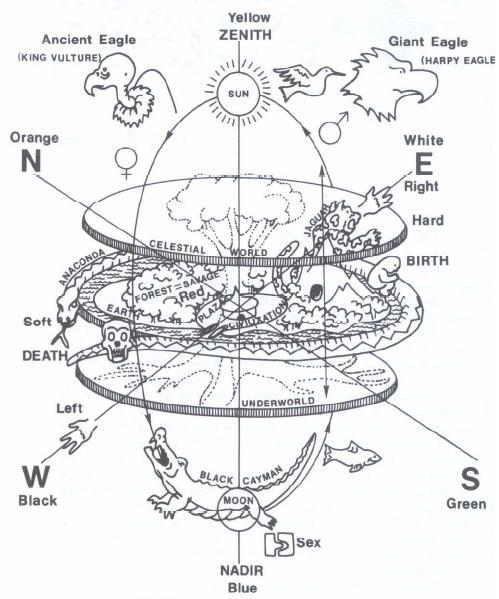 The following is a map created by Yanomami showing the positions of goldminers in their region. The data for this map was compiled with great personal risks. 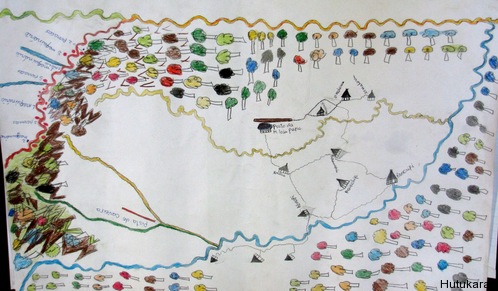