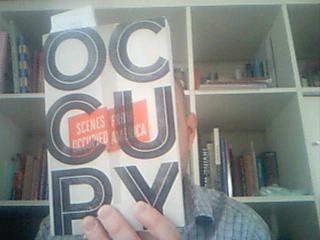 My own ever expanding drivel on Occupy attempts to document its rise and development from the afar and inactive position of a stay-home psychogeographic enthusiast. Occupy is the most exciting development in anarchist inspired protest and civil disobedience in my lifetime and I feel the need to bear witness (as Ezra Pound would say), to record the excitement and interpret the various positions as if each camp represents a game of chess, each player earning points for human progress.

Occupy Wall Street took Zuccotti park on 17 September 2011, by December 2011 Verso published 'Occupy!: Scenes from Occupied America'; it also bears witness, but from up close. The book begins and continues with diary-like reports on the atmosphere of camp and marches, the deliberations during general assemblies, the internal strife between the drummer circle and the rest, the problems of camps not being truly representative of the 99%, the doubts and insecurities that slowly creep in, the mayhem of eviction and of course the logistical nightmare of the laundry. There are 28 authors beautifully edited with each new author adding a new perspective, historical essays on China town, labour unions and consensus decision making, some writers are celebrities like that Hegelian Harlequin (rousing) and Angela Davis (short but strong), unknown writers drop in narratives from other occupation sites. Oakland, Atlanta, Philadelphia each finding a way to deal with the problems generated by local historic and political circumstances. The book is consistently intelligent (there are only two contributions that I like less for being abstract) and well-paced, all the more remarkable for the immediacy of its subject and speed of its production. The design also gets top marks.

Perhaps Michael Sayeau is right when he writes in the Guardian that the picture of Occupy that emerges from this book is a little too educated, too well-argued and too clear to do justice to the more prevalent attitudes of confusion, anger and irrationality. Personally I'd like see the best qualities of Occupy be saved for next generations rather than the mediocre ones. Another criticism one could give about this book is that it is too busy conveying the excitement, adventure and, later, the daily sorrows of camping out that it fails to properly address it's goals, aims and experiences as a protest. Which is a way of saying that Occupy is just another middle class vehicle for personal growth. There may be a point and maybe not; if the citing of violence is the way the 'system' tries to discredit a protest movement, calling everybody who appears to be slightly better of then you 'middle class' is the surest way for protest movements to discredit each other.

Surely this book, the first book, will be referenced for as long as Occupy will be studied. It focuses on the US only and in fact doesn't even suggest that it has gone world wide. I can only hope that in other countries and on other continents people will want to turn their bearing witness into books as lively and as well produced as this one. OWS is the mother ship of Occupy but the smallest camp you can think of in the obscurest part of country is just as important, and I want to read about it.

The majority of the authors presented here are affiliated with the Nplusone magazine which published three issues of the Occupy Gazette, all available online, from which this book is compiled.
op woensdag, maart 28, 2012