Forest forage psychogeography with the Huaorani 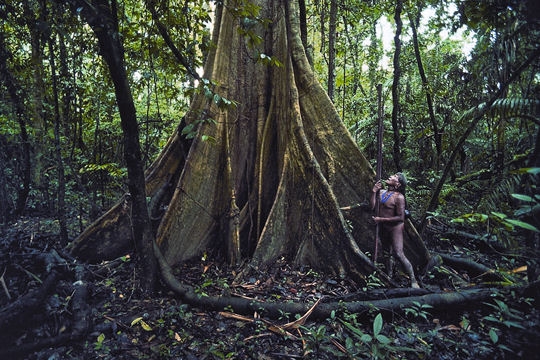 The following quote from Laura Rival ('Blowpipes and spears, The social significance of Huaorani technological choices') on Huaorani knowledge production and dissemination comes from 'Nature and Society' (1996, available on Scribd) and it is just the best thing ever. First it explains how foraging and hunting begins with a specific kind of walk that turns the walker into a dweller and it goes on to explain how the resulting knowledge is not generalized but used to create ever larger repositories to gauge what a specific animal might or might not do. Compare this with an earlier quote from Barry Lopez. The picture shows a Huaorani with tree.

Both men and women have a great knowledge of the habits, habitats and feeding cycles of most arboreal species. Inferring from fruiting cycles, weather conditions, and many other signs, they can predict animal behaviour and locate animals they cannot see. With developed sensorial abilities - especially hearing and smell - they feel the presence of animals and anticipate their next move.

Children acquire this knowledge largely among themselves, as they explore the forest (never beyond an approximate four kilometre radius around the longhouse) with older children.
Men, women and children spend hours slowly exploring the forest along their trails. They do not merely hunt and gather (two activities which are relatively undifferentiated in practice), but walk, observing with evident pleasure and interest the movements of animals, the progress of fruit maturation, or simply the growth of vegetation. When walking in this fashion (a style of displacement markedly different from the one used when going on a visit or when transporting food from one place to another), one does not get tired, or lost. One’s body takes the smell of the forest and ceases to be extraneous to the forest world. One learns to perceive the environment as other animals do. One becomes a ‘dweller’ deeply involved in a silent conversation with surrounding plants and animals (Ingold 1993b). Walking in the forest day after day with Huaorani informants, I began to appreciate that, by interpreting the environment from an animal’s perspective, they were recognising the animal’s capacity for will and purpose.

Birds and monkeys, in particular, show intention and purpose in their quest for food. Documenting this practical knowledge is far from easy. Informants answer questions about animal behaviour with reluctance, as if their knowledge was not verbalisable. Animal behaviour cannot be explained or taught; it must be observed and experienced practically.
Formal interviews, therefore, did not yield any substantial data on animal behaviour, but they made me see some of the principles organising Huaorani practical knowledge. For instance, informants clearly separated observed data from hearsay. When unsure, they openly admitted ignorance. If an informant rewarded my insistence with some (unfounded) generalisation, there was always someone to dismiss it with a counter-example. Finally, animal behaviour was invariably described by means of anthropomorphic expressions (this, according to Kennedy 1992, seems to be a common occurrence among western ethologists too). It was by participating in forest expeditions that I learnt the little I know about animal behaviour and Huaorani perceptions of animal behaviour. Informal conversations, which proceeded at a good pace both during and after a hunt, were also far more instructive than interviews.
Hunting stories are shared with those who stayed behind. Hunters must answer numerous questions, and state precisely which trail they took, how far they went, what the hunted animal was eating, where it was hit, and so forth. Interpretations of animal behaviour are constantly put to the test, and assertions disputed. When telling about a failed approach, hunters are criticised for not having adopted better tactics. A lively discussion ensues, as hunters try to justify their actions on the basis of previous, successful hunts. Women, who accompany hunters and often hunt themselves, fully participate in these conversations. Children listen carefully to these accounts of freshly experienced, observed and remembered interactions between hunters and game. Like their adult kin, they immerse themselves in shared practical knowledge with great delight.