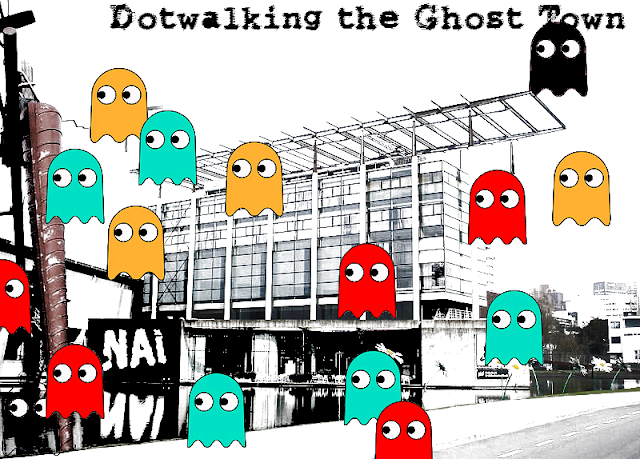 Consider Pacman. Trapped in a ghost town designed to control and subdue him. Running for his life, driven by a hunger that is never filled, eating everything he can only to be forced to do it again and again as he progresses through the system, but in increasingly hostile circumstances. All in the baseless hope that it will get better and that the fear, the existential fear that is his only birthright, will reside. Pacman is in the death grip of a permanent crisis. We all are. It is not a coincidence that generations have mindlessly assumed that Pacman is the good guy, a hero, the employee of the month, but he won't be a role model to my children. Pacman doesn't Occupy the Maze, Pacman is the perfect slave, the one who thinks he is free and happy only because he never tasted true freedom and true happiness. Pacman is not a victim, he is a coward.

Blinky, Pinky, Inky and Clyde are innocent to the concept of labour, their quest to chase Pacman and eat him is purely recreational. Failure is without consequence, the drift is theirs and their wandering strategies are an inspiration to every psychogeographer beyond the maze. Their scatter-chase-repeat routine is a wonder in itself but their swagger in blue mode, when the roles are reversed and they can be eaten by their dinner, is the unchallenged masterpiece in the arsenal of experimental walking techniques. Again the ghosts do not encounter real harm when devoured, they are positively transformed and reborn while travelling. The ghost in blue mode is in trickster mode, they are urging Pacman to feed them power pills not just out of self-interest but out benevolence, to teach him.

Blinky, Pinky, Inky and Clyde are not attacking Pacman, evil is not a useful concept in their carefree existence. They are the Magister Ludi's of crazy cookie land, enticing Pacman to look at the true nature of his condition and rebel against it:

The game is over!

There is no next level!