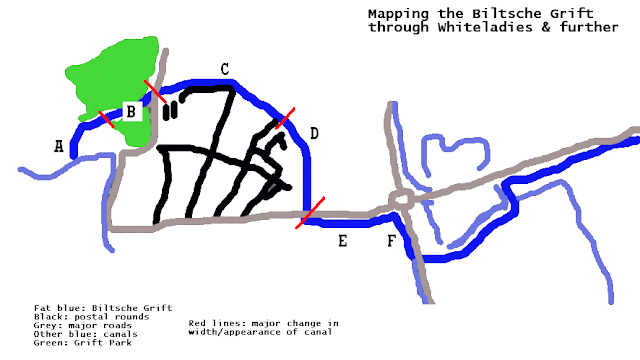 My recent re-assignment to Whiteladies (earlier) has made me discover a street that I can only describe as an idiosyncratic anomaly of great potential. I had seen the Griftse Quay before but now that I actually visit it twice-weekly (as said before "postal work makes geography explicit by walking into all streets and all its front doors") its has revealed itself as a place where discombobulated psychogeographic visions can be read with a fluency as if it was a cartographic street crystal designed by the great magus John Dee himself. Sure, to you it's an obscure, wayward street, shaded by large trees, hard to reach and easy to ignore, but then again you have not even reached the novice stage of your topophilic apprenticeship. The street is actually unusually spacious, like a boulevard with a minority complex or a plaza suffering from small city blues. There are 15 houses to the street, divided in two parallel blocks of 5 and 10 houses respectively, each house has 3 addresses (1, 1 bis, 1 bis a), for one address two of them are up a steep stair, my heart beats in my throat when I climb it too fast. There is a sense of bygone grandeur to the façades. 100 years ago these houses would have looked out over fields or swamps. And from the fields these houses, behind the water would have looked like apparitions of brownstone, the signposts of the city, in the distance, packed away behind the water. Did I mention the canal?

The canal is called Biltsche Grift and it names several other parts of Whieladies, the park most prominently. Wikipedia further informs us that the canal was established in the late 1600ties to create a shipping route between Utrecht and the neighbouring village of Zeist, 10 km to the east. 'Grift' is an old word for canal, and 'Biltsche' refers to the the village of De Bilt located roughly in the middle of Utrecht and Zeist. In some places the canal utilizes a dried-up arm of the river Vecht (F on the map). In the past the canal must have been a major factor in the landscape, and a considerable barrier for travellers to cross, but with the growth and development of the city it has lost its function, its visibility and its identity. The quay, running along the canal contains the only point where infrastructure highlights the canal instead of obliterating it. The steep wooden footbridge makes crossing the canal a noticeable effort.

Looking at the canal from the quay I knew where the water had to come from but I had a hard time understanding where it went. I could not draw this segment as part of a bigger picture and as I figured this out by looking at maps, by following its trajectory on foot and by bicycle I rediscovered bits of the canal I knew and bits of it at places where I never before had bothered to register its existence ("how could I have missed that?). The canal snakes itself unseen through the margins of my daily surroundings and actually makes use of a few tricks to make it hard to comprehend it as one single waterway.

A canal can be buried; there is a play ground I often take the kids to and the canal flows next to it but I had never realized it because the ground makes a drop of a couple of meters below the surface. This also makes it easy to polish it out of the urban fabric because a bridge across it doesn't need height.

A canal can disappear out of sight: for a 500 meter stretch it hides between two back- fronting blocks of housing, D on the map.

A canal can vanish from the map: segments C and D of the canal are missing from google-maps. The canal there doesn't show very well on the satellite image and I guess that the program turning the picture in a map failed to spot it. Google also doesn't know the name of canal, you can't search for it. Open Street View does much better, it knows the name and has the full canal. See image.

A canal can change shape: and it can do so dramatically. The canal turns from riverine to canal to riverine and back every time a street crosses it overhead. The Whiteladies part of the canal is a large bend (a to d on the map) of which the arch only becomes apparent once you look on the map but there is a small piece of it (b on the map, and I needed to rack my brain to remember that this section had been covered before here) that is a recent construction and more obviously manmade. The visual appearance of this segment is very different and it is easy to imagine that the cursory looking city dweller never makes the connection.

A canal can make a sharp bend: a bit further up after it went missing between the blocks of houses it suddenly opens up onto the street, and then it flows immediately underneath it and makes a sharp bend. This is happening close to the busy Biltstraat, and because it flows below street level you can't really see it without twisting your neck into an unpleasant position some charlatans will sell to you as yoga. As it makes the bend it flows into another tunnel but some water spills out into a dead-end mote dividing the garden of a posh mansion from the street. You could easily assume the mote to be the end of the stream.

A canal can be picturesque if you are willing to die for it: the way the canal flows away from street view between the two blocks and the way it opens up the view line of the Biltstraat are in themselves pleasant views, but the best place to admire them is out on the street where the cars and the city buses race through. The canal looks best under the eleven bus.

Later the canal makes another sharp bend and then it hides behind the motorway, runs between the motorway and the backside of the Catholic Graveyard. I sometimes visit the graveyard, which is beautiful and meditatively tranquil, but never spotted the canal. Then it makes another sharp bend, underneath the motorway, and drains into park Bloeyendaal. Behind the motorway the stream also forks into another stream, the Minstroom which flows west, back onto the city canal. The Minstroom has a long history connected with urban plant cultivation but that is another story.

A canal can be hidden by human arrogance and/or utter stupidity: because Wikipedia said the Biltsche Grift runs from Utrecht to Zeist, because trade once went from Utrecht to Zeist, because Utrecht is a town and Zeist a village, because I am a modern guy who knows about Blogger vs Tumblr, I never bothered to check which way the water runs and of course the canal actually flows from Zeist to Utrecht while I have been tracing it here as if it was flowing away from it....

It might be internet-cool to search for the lost rivers of London but I challenge you to see the visible river in your own backyard first. When I have the time I plan to walk the entire length of the canal but for now I just want to say to you that locating the Whiteladies watershed makes me a really happy man...
op woensdag, februari 22, 2012