The Amazon as a cryptoforest megapolis 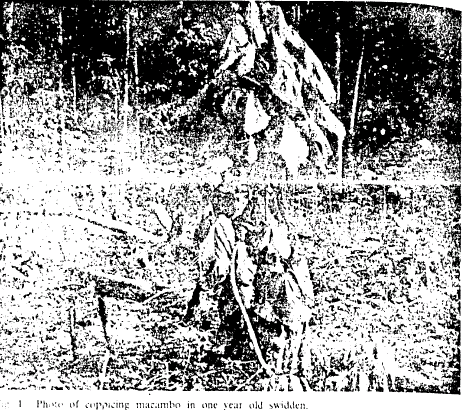 The Amazonian Indian techniques of swiddening is not just a bit of slashing and a bit of burning. Swiddens have a long use and shifting use that are meant to change the landscape for a long time. From a 1986 article by Leslie Sponsel (PDF-link) comes this resume.

The major source of carbohydrates is cultivation of the variety called slash-and-burn, shifting, or swidden. Like other agroecosystems, swiddens are anthropogenic, created and maintained by humans through the manipulation of limiting factors and with the input of energy and nutrients. Also, swidden takes advantage of environmental conditions and processes in the early stage of succession. The slash opens section of forest to allow penetration of sunlight for photosynthesis of the new plant community. The burn returns nutrients to the soil, although substantial amounts are lost to the atmosphere as volatiles and particles as well as to leaching. As the crops grow and are harvested, nutrients are removed from the agroecosystem until productivity declines after two or three years. Another factor is competition as wild plants take root and compete for nutrients and light, part of the natural process of succession. Often tree crops are also planted which encourages succession and eventually the return of the forest.

Swiddens are not necessarily abandoned; instead, they often phase into another type of agroecosystem known as agroforestry. Tree crops mark the transition from swidden to forest, but this is not a sharp boundary in either space or time. While agroforestry is a new research frontier for Western science, it is an ancient practice among indigenes. The Bora exploit up to 135 plant species in their garden fallows. The Kayapos till harvest plants and hunt in their gardens after 40 years. They even plant species to attract game. Swiddens are adaptive for subsistence economy as long as the population density is relatively low, ample land is available for active and future gardens, and fallow area and time are sufficient for forest recovery. Geertz, among others, argued that swiddens are adaptive another sense--intercropping imitates the diversity and structure of the forest. However, swiddens do not always mimic the forest in the way Geertz suggested. In Amazonia they range from polycrops to monocrops (including polyvarieties) and are adaptive in other ways. Agroecosystems generally provide a morer eliable supply of foods than do wild plants and thereby allow greater size and sedentariness of the human population. Many anthropologists have linked this in turn with greater cultural complexity, although this position has many critics. Recently Moran argued that there is a tension between farming and foraging because the latter requires mobility which works against acquiring adequate ethnoagronomic knowledge of soils for efficient productivity of swiddens. However, the Kayapo practice a form nomadic agriculture in which on treks six to eight months long they visit old gardens and plant new ones and in other ways experiment with domestication and cultivation. Furthermore, Posey argues that there continuum from wild to semidomesticated to domesticated plants which developed over millenia of experimentation by mobile indigenes.

Did I read that right!? "The Bora exploit up to 135 plant species in their garden fallows." Can you even name that many species? Here is the PDF of the source for this (and the images used here). Also don't miss that little sentence that argues that to be a good nomadic forager you need qualities that you can only acquire by being a stay-home peasant.

The implication of all this is that the Amazonian rainforest is not a pristine natural landscape but one gigantic man-made fallow. The argument continues by stating that the pure hunting-garthering lifestyle in the Amazon is only possible because of the presence of (often ancient) fallows. One good overview for all this is Laura Rival's 'Domestication as a Historical and Symbolic Process: Wild Gardens and Cultivated Forests in the Ecuadorian Amazon' (PDF-link). The following paragraph discusses the Huaoroni view and use of the forest (also see) and the way they try to see everything in its historic context.

Lévi-Strauss noted, more than forty years ago, that in South America “there are many intermediate stages between the utilization of plants in their wild state and their true cultivation,” and that “farming always accompanies, and is never a substitute for, the exploitation of wild resources.” This remark applies particularly well to the Huaorani context, where numerous plant species are encouraged to grow outside of cultivated areas as people engage in numerous daily actions (planting, selecting, transplanting, protecting, using, and discarding) that have a direct or indirect effect on the distribution of species, be they fully domesticated or not. Huaorani people daily consume a great number of cultigens that are not planted in gardens. They see in their forested land the historical record of the activities of past generations. They are quite explicit about the inseparability of people and the forest, which they describe as a succession of fallows. Most of the western part of Huaorani land is said to be ahuene—that is, secondary forest. Only in the Yasuni, they tell me, are there pristine forests, omere, with really high and old trees. Secondary forests are further divided into huiyencore (four-to-ten-year-old clearings characterized by the frequency of balsa trees), huyenco (ten-to-twenty-year-old clearings), huiñeme (twenty-to-forty-year-old clearings characterized by the high incidence of adult palms), and durani ahuè (forty-to-a-hundred-year-old clearings, remarkable for their big trees). Before the arrival of missions, huiñeme forests were the preferred sites to establish main residences. However, all types of forest were—and still are—continuously visited and lived in for longer or shorter stays. Cultivars are found—discovered—throughout the forest. This further indicates an evident strategy of resource dispersion within specific regions. Fish-poison vines are found along the creeks where people fish, semiwild fruit trees near hunting camps, and numerous useful palms (such as Astrocaryum chambira; in Huaorani, oönempa) along trails. The regional groups (huaomoni) are constantly moving through their vast and relatively stable territories. Hilltop longhouses are regularly left for hunting and foraging trips, during which forest-management activities take place. Wherever a Huaorani finds herself in the forest, she chances upon needed plants. Informants are vague as to whether these strategic and handy resources were planted by someone, or just happened to grow there. What matters to them is that their occurrence can be related either to individuals known for using a particular area regularly or to a house-group who lived in the area, sometime in the past. For instance, when young Huaorani unexpectedly discover useful plants in a part of the forest they are not familiar with, they often attribute them, with noticeable pleasure, to the activities of past people. If they decide that these cultigens were left by dead forebears—usually great-grandparents—they may see the plants as an invitation to move permanently and legitimately into this part of the forest, and to create a new longhouse. When no certain link with past or present human activity is established, the wide occurrence of cultigens is linked to animal activity. For example, semiwild manioc is said to “belong” to the tapir. 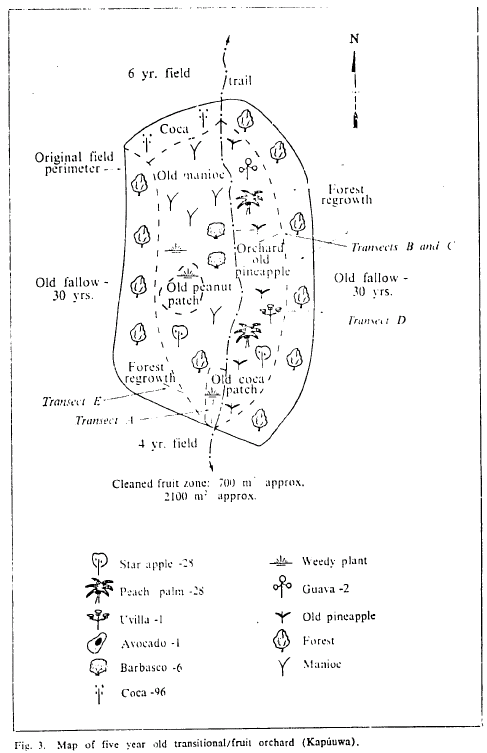 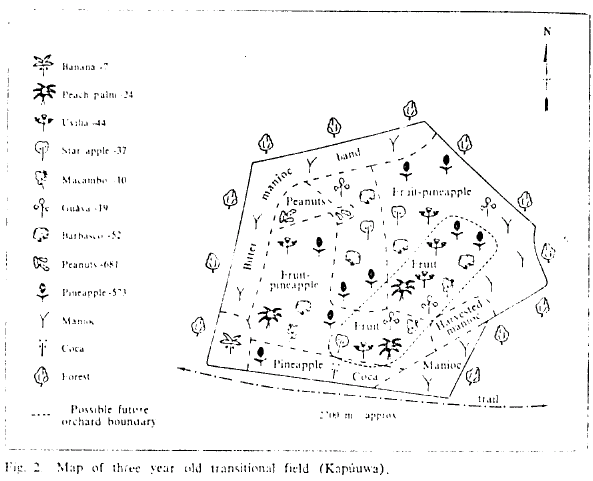