The ten streets of Garden Village that I call mine have refused to reveal their secrets for yet another month. Maybe there aren't any? It is not that I can't cite a lack of particularities and vortexes of dark energy but that amidst the monotone streets they fail to connect. I am beginning to suspect that the care and detail that went into the original design of Garden Village is a red herring.

For instance: each house at the end of a block is a bit higher with a differently shaped roof, creating the idea of a medieval castle with corner towers on each end. But when a house in the middle of a block faces the street that runs away at a T-junction, like so (* for house, = for street):


that house will also sport a 'tower'. It's a prime example of the consideration to detail that went into the design that I can't imagine happening in today's atomized modern-day property development projects (that are, as we all know, run by criminals). The rationality of the street planning returns in the naming of the streets: they are named after early 20th century scientists. The point is: I tend to look at such details as significant, but they aren't: they do not fill the void, they only bend it.

Postal recall. Sometimes it happens that I find between bundles of mail that need to be delivered a letter addressed to a house in a street where I already did my deliveries. As most postal rounds are designed to bring you back to your starting point I proceed to make a mental calculation of the exact location of this address in order to know if and how close I return there. As the weeks pass I find that I am getting better at visualizing randomly selected houses. I begin this process by semi-randomly choosing addresses that I know for sure, mostly corner houses, and then I will hone in. When I am there, the details come rushing in: what kind of mailbox they have, the way the garden looks, the people who live there, the sort of mail they receive. It really feels like my little minds are jogging through a database, finding information through association and deduction, using this information to search deeper or elsewhere. It really 'feels', and it feels quite pleasant, as if thousands of starving neurons are shouting hurrah as glucose rich blood flows their way in order to release their sordid, otherwise junk, imagery. 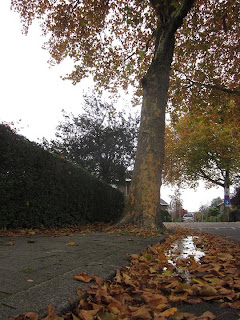 Here is a Virgina Woolf question: what am I thinking about when I am working? Where does the stream of conciousness flow to? The answer is not easy to give. I find it hard to say what I am thinking about. Afterwards I never feel to have thought anything but on the job I think of zillions of things but all are fragmented and in Batman language: PoW!, ZaP! The job gives plenty of opportunity for contemplation, musing and daydreaming, there is a lot of trajectory between mail boxes. However, I also need to pay attention to what I am doing: the post needs secure delivery because people will complain. That's how they are. This prevents any form of sustained pondering. The job itself offers its own 'zone', but, in the distances between streets, my mind wanders too. It is telling that I never suffer from earwurms. So in what state do I return home? With tired feet and a lot of decayed half-thoughts in my memory, slightly confused.

Most of my colleagues listen to music on their work and of course the job is perfect for it. But I never do it because I think it would turn me in a complete schizophrenic wreck, not because I am such a precious, tender and fragile soul but because they use music to separate themselves from their environment while I want to immerse myself in it.

The task for next month: find a new suspect.