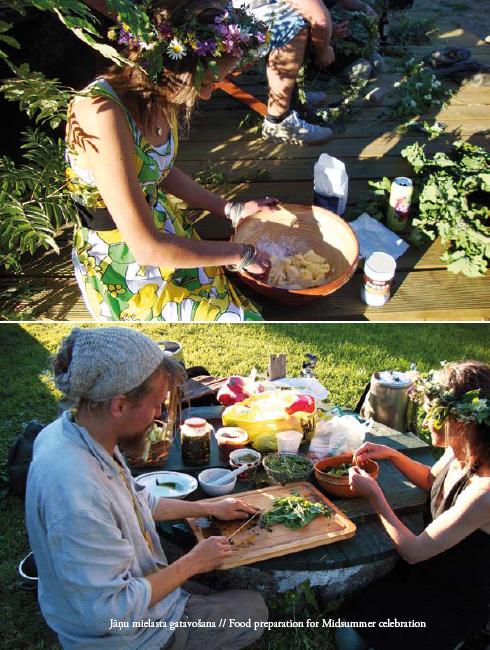 The ongoing 'Herbologies / Foraging Networks' has taken up the challenge of (urban) reinhabitation with a number of events, publications, projects. The introduction, compact and thorough, stresses the need for a personal relations between people and their surroundings, observes the loss of traditional knowledge concerning plants and their uses in the span of a generation, but it also finds that this knowledge is still of continued importance in some places, often to those people regarded by the forces of power as backwards and primitive. The introduction also tries to answer the question why a practise like forage, something regarded as completely outdated only 5/10 years ago, is now suddenly of interest to a large group of people who have never acquired the knowledge involved through the normal tribal and familial channels.

Younger people’s interest in sustainable food production and environmental awareness appears to be creating a revived interest in local and ecological use of plants, between these different places and beyond. For those in their teens, 20’s and 30’s, online information, data and social networking sites have also become the main communication and sharing medium. In addition, do-it-yourself/ourselves ‘maker’ culture has blossomed in recent years thanks to audio-visual culture, and in particular participatory platforms which support digital image or video-sharing. For example, Instructables and Maker Magazine are strongly based on community-created content, with images and videos uploaded to show how to make objects, components, hacks and other adjustments in the physical material world. This trend is also extending to ‘grower’ and ‘forager’ sites, which share example recipes and activities. However, the content is often English-language focused, creating linguistic and cultural biases in how to do things, without localisation or context-specific adjustment. Furthermore, when these materials are based on traditional indigenous knowledge, issues are raised about how it should be appropriately published.

And yes, the Herbologies / Foraging Networks is on Facebook. My favourite project is the Herbologies Expedition to Aizpute and Alsunga in Kurzeme, rural towns in Western Latvia that took place in June 2010.

The main topics for the herbologies expedition included how to recognise, gather and use wild plants and flowers for: teas, infusions, tinctures, sauna whisks/besoms, home-made herbal cosmetics, midsummer crowns from wild flowers and oak-leaves, as well as the ‘pharmacy’ of plants found outside in nature.

The resulting bilingual Exercise Book of Traditions 2010 shows that one logical result of the modernday foraging revival is that it will leads the forager into the domain of ethnography and ethnobotany. That the H/F Network is recognized as artisticlly relevant by the arts, see for instance this interview with Rhizome.org, echoes earlier developments like ethnographic surrealism. After 50 years of siegheiling technology the revolution of the human mind again becomes the main subject of art. The savage is the teacher, the primitive is the preacher.
At the risk of ephasising the exotic and the Harry Potteresque I am including two recipes/remedies from the book here. Not for the sake of exoticness but because it shows how strange and undiscovered the world still is. Even here in domesticated and unified Europe.

Cow’s dung
I was given cow’s dung with milk.
Well, and how was that?
No problem, because I read in one magazine, that the cow’s dung is pure penicillin.
Penicillin?
Yes! The cow eats grass and then it processes it into dung as penicillin. And then with warm milk. You squeeze it out. You don’t need much, about some 3-4 drops into the warm milk and then it is ready to drink.
Oh, so You don’t eat it with the grounds?
No, then you’d be dead!
But, for example, do You need to have the cow’s dung fresh?
Fresh, yes! Just when it has defecated, you must immediately take the dung and squeeze it in a gauze.
That moist thing, that is left behind?
Yes, that moist thing, you squeeze that and put into warm, just milked milk. Warm milk, warm dung – and then you must drink that. I know that my mother gave it both in the morning and in the evening.
But did she tell, what that was, or didn’t she?
Yeah, right, as if she would tell! She says: ”There’s nothing, just honey with milk.” But you don’t imagine that a child sees anything there, some green thing floating or anything. My daughter, she had caught a cold and my neighbour had a cow and then I was running back and forth healing my doctor [the daughter].
With the dung?
With the dung and warm milk. The son-in-law comes: “Mum, what are you giving her? also don’t feel so good”. And I just make another.
And don’t they know anything?
No, I told them.
Before or after that?
No, when they had drunk that already. The son-in-law says: “I didn’t feel anything – that there would be a dung in it!”
Snakes and toads
My dad smeared it on his legs, hips... My mother put the snakes, the vipers in a jar with vodka. When she went to the woods and stumbled upon a viper, then she ‘hapc!’ pressed
them with a crutch and let them into the jar.
You press it’s head?
Yes, and let it into the jar alive. Then she, when she’s done, rushes home and pours vodka over it.
When it’s alive?
Yes. Vodka and then she packed the jar and put it in a dark chamber. And then later there was nothing left of that snake. Pure vodka, only a bit of clouds underneath. Well and she prepared also the toad. I don’t know if she put it in alive or not, because I never saw that, I saw it only then when she took it out of the oven and ground a powder in the mill.
And did she give that powder to the animals?
Yes, she mostly gave it to the animals.
And what was it good for?
I think that it was for the pigs. My mother says: “The pigs contract Diamond’s disease”.
In order to avoid that, because the sows were being kept and the piglets were sold. So that the piglets would be healthy. I also know that it was used for the cow. I only saw that she prepared something, crossed herself, messed about and – a bucketful is ready! The cow eats that. She [mother] made a lot of tricks like that.