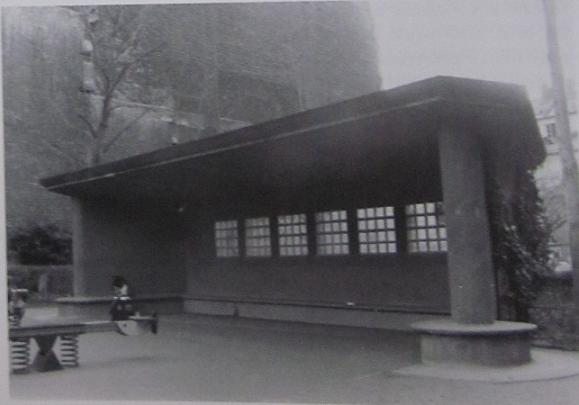 In January 1955 Michelle Bernstein pointed the readers of Potlatch to the above structure on Le square des Missions-Etrangères (see here for a 2010 winter view). She described it as "a kiosk of great dignity which looks for all the world like a station platform and has a medieval appearance". She ends with the notice that it "may be used for receiving visitors, for being stormed by night and for other psychogeographical purposes".

Simon Sadler's The Situationist city argues that for Bernstein psychogeographic architecture is created by placing out-of-place objects at unexpected places. Sadler adds that for Bernstein the structure was a modern day folly, "meant to move the viewer to salutary states". He also states that "Bernstein's admiration of the structure typified the situationist acceptance of ugliness." But where does Bernstein actually says she finds it ugly?

Notbored (where else?) offers Bernstein's complete text which is really the 1950ties equivalent of a blogpost. (with thanks to Tina Richardson for reminding me)


On the border between the 6th and 7th Arrondissements, this small garden, squeezed in between the nearby rue de Babylone and boulevard Raspail, is not easily reached and is normally deserted. It is fairly extensive, as Parisian public gardens go. There is almost no vegetation. From inside, its forked shape becomes apparent.

Its shorter leg is enclosed between blackened walls over ten metres high and the backs of some large buildings. On this side, a private courtyard makes it difficult to make out the garden's edge.

The other leg is overhung on one side by the same stone walls and bordered on the other side by the attractive facade of rue Commaille, a very quiet street. The end of this leg abuts on rue Bac, a street with a great deal more activity.
Square des Missions Etrangeres, however, is separated from this street by a strange, empty plot of ground, with a very dense hedge between it and the garden itself. In this totally enclosed empty garden, whose only prupose seems to be to keep a distance between the garden and the passers-by on rue Bac, there is a bust of Chateaubriand, two metres above the ground, in the form of the god Terminus, commanding a cinder covered surface.

The only access to the garden is through a gate situated at the point of the fork, giving onto rue Commaille.

The only monument in the neighbourhood serves to block the view even more and to prevent access to the empty garden. It is an exceptionally dignified kiosk, highly reminiscent of station platforms or medieval regalia.

Square des Missions Etrangeres may be used for receiving visitors, for being stormed by night and for other psychogeographical purposes.

(Written by Michele Bernstein and published in Potlatch #16, 26 January 1955. Translated from the French by Gerardo Denis.)