Desire paths? The only way of navigating a cryptoforest. Listen to Wikipedia, see them collected here and as elephant paths here:

A desire path (also known as a desire line or social trail) is a path developed by erosion caused by animal or human footfall. The path usually represents the shortest or most easily navigated route between an origin and destination. The width and amount of erosion of the line represents the amount of demand. Desire paths can usually be found as shortcuts where constructed pathways take a circuitous route. Before moving on to others pastures listen to Henri Thoreau:

If a man does not keep pace with his companions, perhaps it is because he hears a different drummer. Let him step to the music which he hears, however measured or far away.

Listen to Clark L. Erickson (Agency, Causeways, Canals, and the Landscapes of Everyday Life in the Bolivian Amazon) on recent and old canoe-dragging desire paths in the Bautes Hydraulic Complex in Bolivia:

Minor Causeways-Canals were also laid out in straight alignments but are shorter in length and required less construction than the Major Causeways-Canals. These features consist of a single shallow canal (1 m wide and less than 0.5 m deep) with low causeways or berms alongside . My informant-guides and I interpret these shallow canals as precolumbian canoe paths: channels for paddling or poling large canoes across the shallow inundated savanna during the wet season. During the dry season, the channels could be used as routes for pedestrian traffic through savanna grasses. Repeated paddling, poling, or dragging a large canoe through the shallow water can create canal-like depressions over time with minimal planning or labor. The irregular scar of annual canoe transit of my native guides is a good example of what a few hunters can do through even irregular routines over many years. Their paths have been permanently etched on the landscape as a modern layer of palimpsest. I can trace their recent canoe path across the savanna to their forest island camp on satellite imagery, a distance of 7 km. The sinuous irregular courses of these recent canoe paths stand in contrast to the straight trajectory of Minor Causeways-Canals, which implies concern with trajectory during the initial shallow channel excavation. 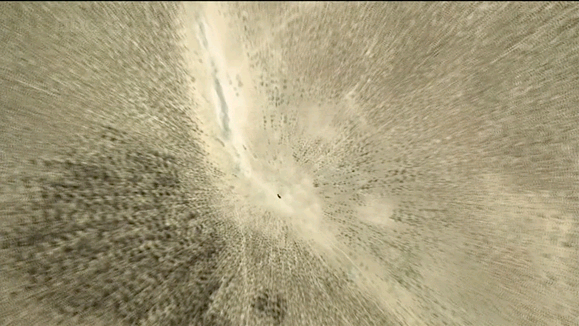 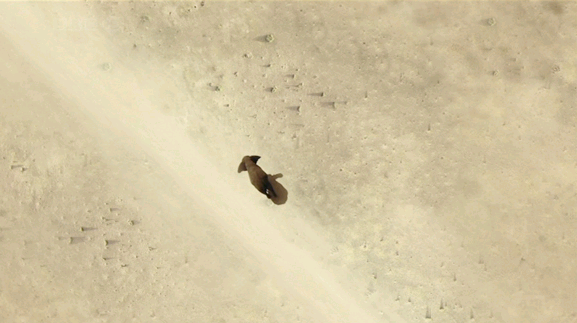 The website of the Virunga National Park in Congo offers pictures of the damage done to a forest environment when a herd of elephants comes storming through:

From the ecosystem upsetting elephant it is only a small step to an interview with Harald Beck on the crucial Mongabay website. Beck researches the peccary, a frolic little swarming bush pig that creates wallows,  desire swimming pools?
Listen to Harald Beck:

At the Cocha Cashu field station in the Manu National Park, my students and I tested if peccaries were ecosystem engineers by creating and maintaining wallows, water filled depressions in the forest floor that typically range from 1 to over 50 square meters (photo). Peccaries may use wallows to cool down and to reduce the parasite load, or just because it is fun to splash in water and roll around in mud.

Interestingly, the oldest wallow is over 17 years old! This means that numerous generations of peccaries use the same wallows and pass their locations on to the next generation. Over time wallows become larger and deeper as peccaries compact the soil and widen the edge. Wallows can be easily distinguished from natural ponds by signs of peccary wallowing activities, such as footprints or mud spray on the surrounding vegetation. Because of their trampling, no plants or even leaf litter are on the floor. In most rainforests during the dry season, standing water bodies are scarce on the forest floor, therefore peccary wallows could be critical aquatic habitat and breeding sites for insect and frog species.

Wallows had consistently higher water surface area than naturally occurring ponds. This is also critical because it means that wallows are more stable and predictable habitats than ponds. So given the choice of laying eggs in a stable wallow or soon dried up pond, where would you go? With that in mind, it was not too surprising that wallows had a significantly higher density of tadpoles, metamorphs ("tadpoles" with legs and ready to conquer the land), and adult frogs. Furthermore, more species of all three frog life stages occurred in wallows than they did in ponds.

We also found other species in wallows, including numerous aquatic insects (i.e. beetles, dragonflies, mosquito larvae, and even a semi-aquatic cricket!), and spiders that glide across the water surface and hunt prey. We also found mussels, at least nine different species of fish, and two species of snakes. This year we installed motion-triggered cameras and captured bats skimming across the water surface. However, nothing beats this example of a Crocodile wallow in the Northern Territory in Australia, can you spot the croc?