This is interesting to pursue for the way it might corroborate larger historic explanations of how cuisines have developed. China developed in isolation much longer than any other civilization in the old world, is its cooking also more singular? India has been invaded several times and its food is very much a product of its own cultures clashing with its Muslim conquerors, does that make it stand out from the other Asian cuisines? Read Rachel Laudan's book Cuisine and Empire for the bigger historic picture.

In practice when using the word cuisine we are actually comparing English language books written for an audience of English speaking home cooks; an important difference.

The number of foodpairs a recipe generates increases exponentially with the number of ingredients. A typical cookbook (and the ones we use here are all modest one) yields anywhere between 700 and 2500 pairs, the number of connections when comparing three books is large and a really meaningful way to visualize a foodpair comparison we have not yet found. Instead we have turned to using the Jaccard Index, a simple formula for comparing similarity in datasets.  If two book are absolutely similar (a book compared with itself) the index is 1, if the books are completely dissimilar the index is 0. So how higher the number how greater the similarity. Let's look at how Jamie Oliver's Naked Chef compares to 12 cookbooks representing many styles and cuisines. 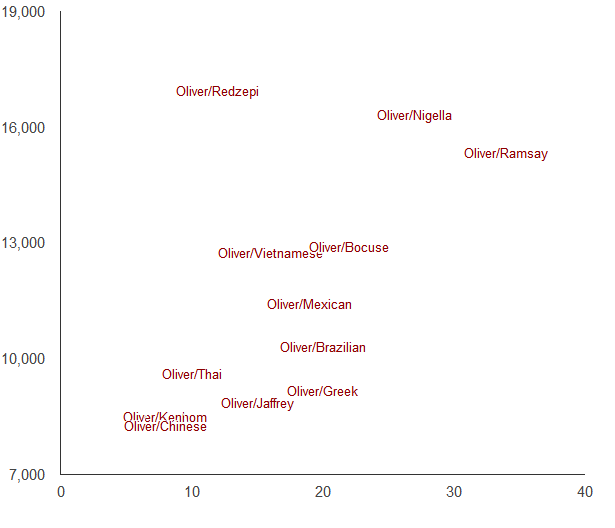 The Horizontal line is most important as it shows the similarity (in %, Jaccard index*100) between Oliver and the book being compared. The vertical line gives the total number of unique foodpairs in both books. According to this Oliver is most similar to other UK TV chefs Nigella Lawson (27%) and Gordon Ramsay (34%). He is equally similar to books on French, Mexican, Brazilian and Greek food. He is least similar to the two Chinese cookbooks (8%). The fcat these two Chinese cookbooks are equally dissimilar is important: it shows they are themselves similar, as you would expect. 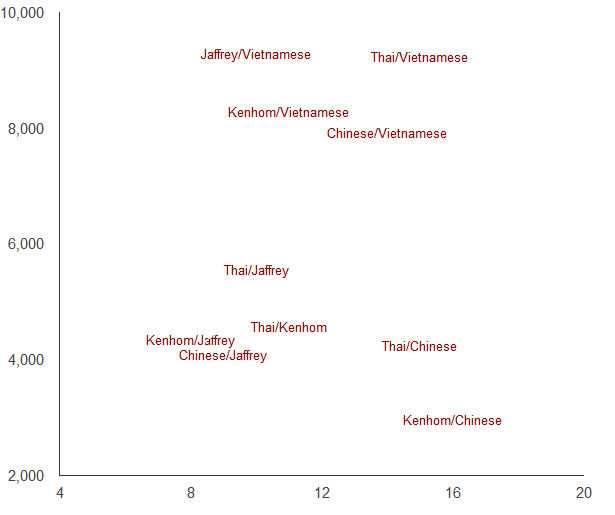 Indian/Chinese has the least similarity, Chinese/Chinese most but with 16% which puts perspective on the 34% similarity between Oliver and Ramsay.

Here is the graph comparing 13 cookbooks with each other, it is large to make it legible (click to enlarge). A rough guess is that 10-15% comparison is average. The 20+ similarity for UK celebrity chefs is striking but further work will have to decide how striking. 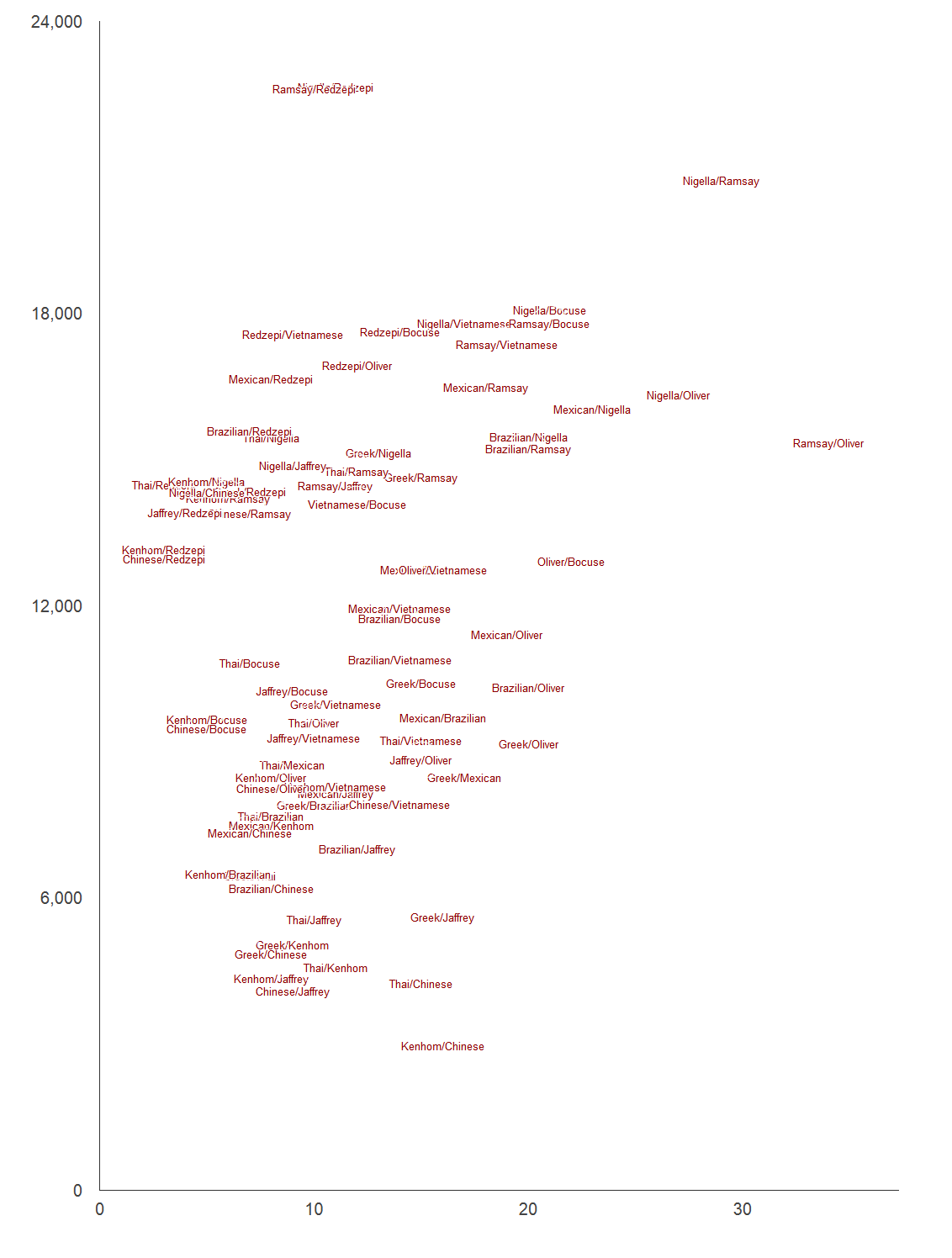 It is much easier to compare cookbooks on the presence of ingredients alone, there is much less data. When doing this for the same books as above the graph below is created. Or check here for a interactive one.The numbers are different, the Jaccard-index gets much higher (54% ingredient similarity between the top-scoring duo Ramsay and Oliver), but the overall shape of these two graphs is recognizably similar, especially when you factor in the difference in scale. This is good news because proper food pair data (recipe for recipe) is hard to create while creating ingredient lists for books is exactly what foodmap does. 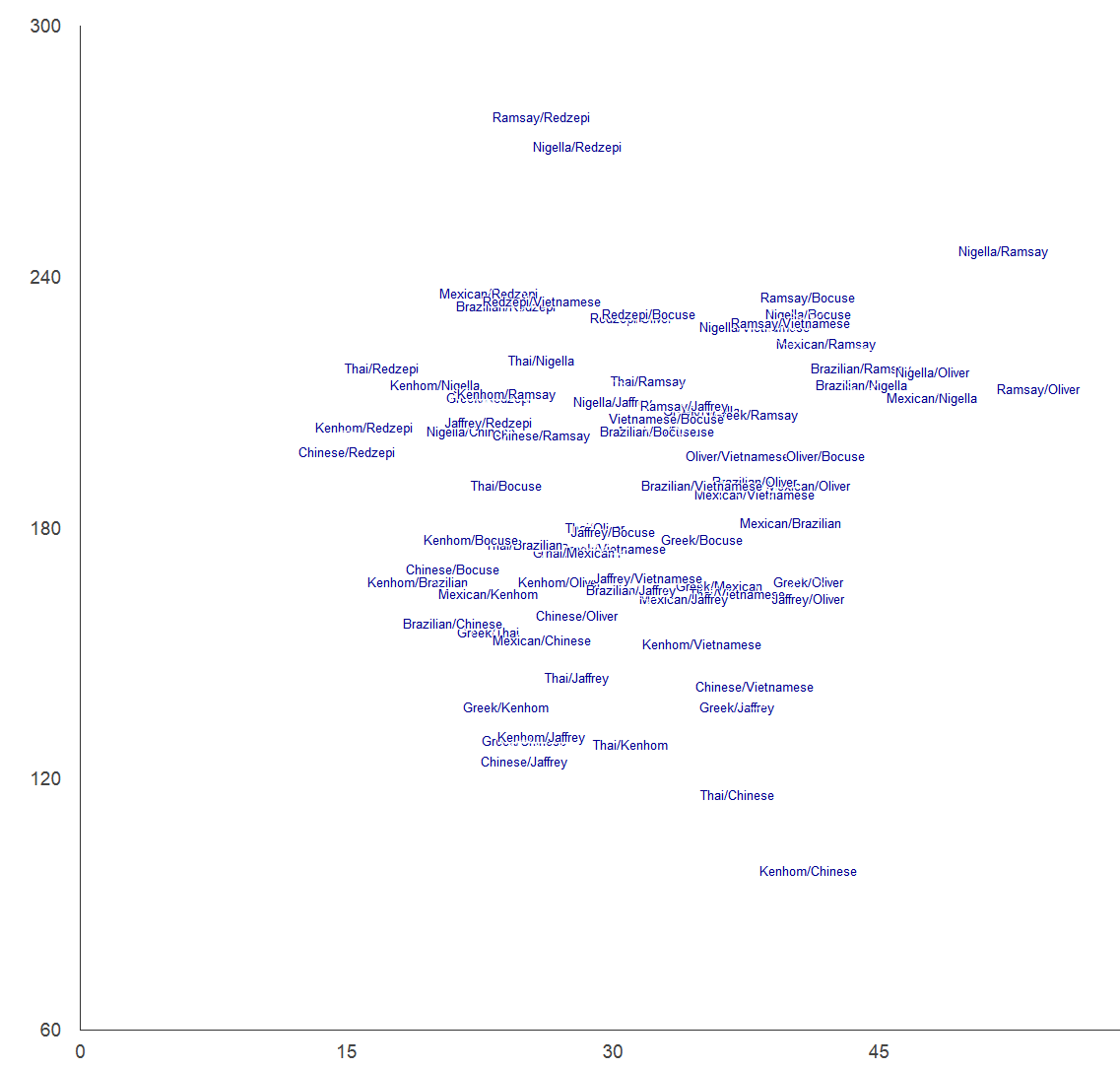