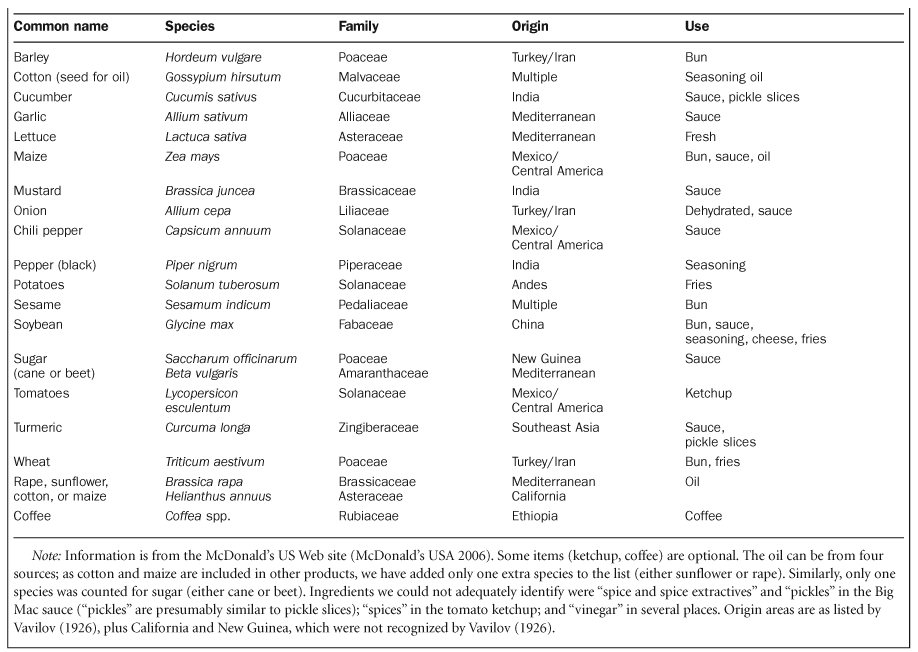 This is a paper right up my street: "Plant Diversity in the Human Diet: Weak Phylogenetic Signal Indicates Breadth" (2008; Procheş Şerban, John R. U. Wilson, Jana C. Vamosi and David M. Richardson). After noting that "it is often argued that globalization leads to uniformity in human diets" the paper continues:

The ingredients of a Big Mac hamburger are considered varied enough to make the price of a Big Mac relevant in economic comparisons between countries ("the Big Mac index"). We therefore thought it would be interesting to list the plant species that go into a McDonald's meal. A typical McDonald's meal——a Big Mac accompanied by french fries and coffee——contains at least 19 plant species from 12 families (table above). These species originate in all of the eight global centers of cultivated plant diversity identified by Vavilov (1926) and largely confirmed by more recent reviews, which means that a Big Mac is quite an apt symbol of globalization. That a single meal contains about 20 species is impressive, given that some human societies——those that are largely unaffected by current globalization trend——commonly include only 50 to 100 plant species in their entire diet.

The paper does not include a map but Map Your Recipe can provide one. MyR is using an updated scheme developed by students of Vavilov and instead of recognizing foodstuffs from eight centers of domestication it is counting eleven. Not all ingredients will be present in every Big Mac. Sugarcane may be domesticated in New Guinea but that is probably not where the sugar in your sauce came from. If you want see who are the top producers of these crops today Foodmap has a tool for that too. Eat your BigMac with some Macadamia nuts (Australia) and Lemon (West Africa) and you can bring the number of food regions up to the absolute maximum of 13.