'Molongo' is the new buzz word 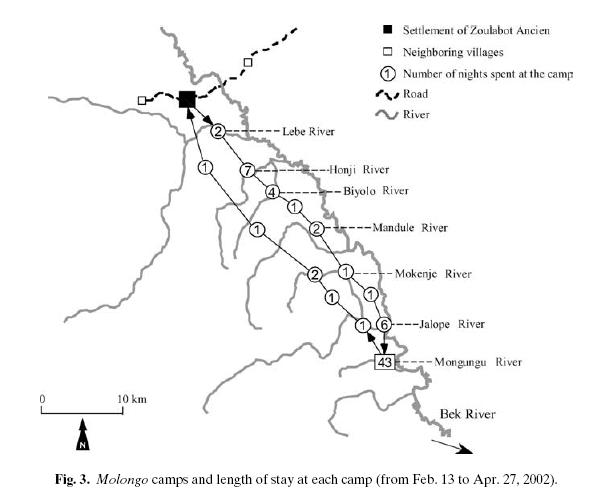 In a paper called "Long-Term Foraging Expeditions (Molongo) among the Baka Hunter-Gatherers in the Northwestern Congo Basin, with Special Reference to the 'Wild Yam Question'" Hirokazu Yasuoka "describe[s] and analyze[s] a long-term foraging expedition (molongo) among the Baka of the northwestern Congo Basin as an example Long-Term Foraging Expeditions of foraging life in tropical rainforests. On the basis of these data, I then discuss the potential of tropical rainforests as a human habitat."

There is lot of energy intake calculating going on in this paper but for our purpose it is enough to give you a few of the images and that part of the text that explain the daily proceedings of the Baka life during the vacations expedition. What amazes me is how slow the trek proceeds. The final camp is roughly 50 kilometres away but it takes 16 days to get there while it only takes 6 days to get back. On the molongo people take it slow.

An important sociocultural aspect of molongo is the value placed on a nomadic life in the forest. When on the move, the group would usually decamp at about eight o’clock in the morning, often breaking into several sections to variously hunt such animals as they encountered or gather plants and honey. In the early afternoon when they decided on the location of the new camp, the women began to build huts of saplings and large Marantaceae leaves, while the men again went hunting with spears or to look for honey. When fresh tracks of a large animal were found, the hunter and his assistants perused it with the gun. The Baka moved the campsite every few days before arriving at the final camp of Mongungu, where they continued to use the forest intensively for their 43 night stay.

Once at the Mongungu camp the men set cable snares along seven routes of 2–4 km stretching in a radial pattern from the camp. Hunters visited their snares every three days, because trapped animals spoiled within two days of dying. Men searched for honey or hunted with spears on the other days. The women went out digging for wild yams every two or three days, sometimes accompanied by their husbands. The wild yam species harvested most frequently was Dioscorea praehensilis, which can be found in large quantities in one place. Almost all of the cable snares and the major gathering sites for wild yams were within 3 km of the camp, so the most intensively used area was approximately ∼30km2.

The article is behind the academic firewall, with many tanks to a reader for the PDF. 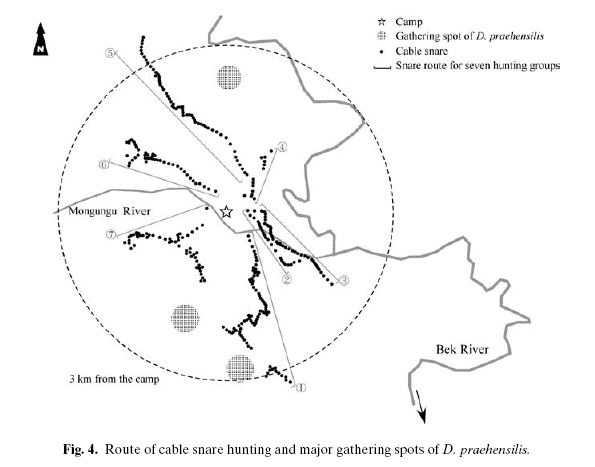 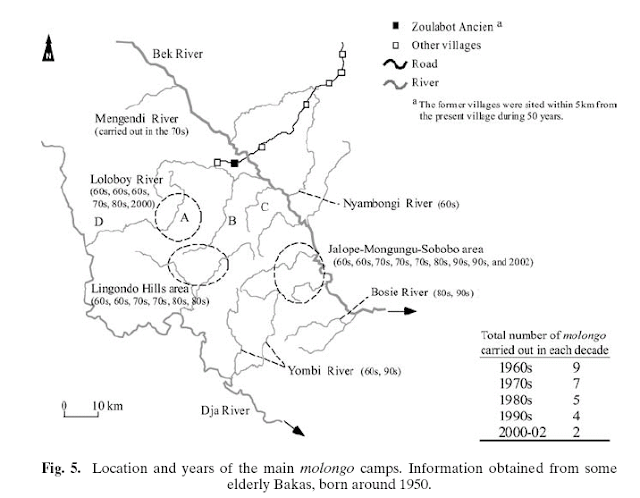