WORK COMSUME DIE [Will Self: PsychoGeographer] 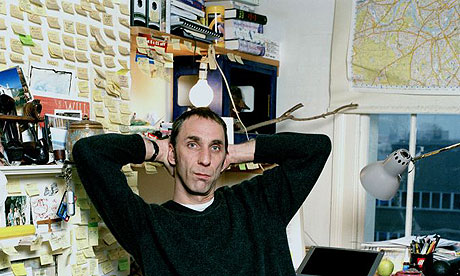 Will Self writes a column named 'psychogeography' for The Independent and there is a book out with the same title.
It does not appear that Self is taken very seriously by the overlords of the UK psychogeographic book guild. Stewart Home has long ridiculed Self's writing as the 'self-indulgent dribblings of a sad Oxford junkie' and Iain Sinclair has repeatedly made unfriendly remarks about Self, calling his use of the world psychogeography a devaluation of the practise into a form of tourism. Though Sinclair might in reality be more friendly than that.

What surprised me about this mp3 with a 2007 interview with Self at the LA Public Library, is that Self is a lot more explicitly and politically outspoken than Sinclair (who remains polite, unobtrusive and distant) or Stewart Home (who is far less political in his writing than he appears as a public persona). Self is more punk, quoting a 'Work - Consume - Die" graffiti as the best expression of what cities are nowadays about. The idea of walking from his home in London to a Hotel in Manhattan with a transatlantic flight in the middle is brilliant. Self explained the walk in political terms: as a way to free yourself from work-comsume routines without losing the sense of where you are, in the process discovering all sorts of assumptions about humans and travel: it is not possible to leave Kennedy airport on foot! Self's case for psychogeography (or any other non-consuming mode of urban use) as a tactic against society is made much franker than I have heard the two Iain's (Sinclair and Borden) do it.

In relation to travel writing Self considers most books as either 'travel porn' or as 'deeply bogus', promising a flimsy possibility of belonging somewhere where you will actually forever remain a stranger. Self aims to reveal the deep disorientation that hides beneath the superficial disorientation of first contact with a new place. Which is exactly what you expect from good anthropological writing.
Self also spoke about an observation he had been having when doing long distance walks, on how as the kilometres pass underneath the built landscape vanishes from view and the geological landscape, the patterns of hills and watersheds start to take command.Good man.
op dinsdag, juli 12, 2011